A Blast from the Past

A week ago, Carolyn and I found ourselves exploring the ruins of the farm on which I had grown up and left some 55 years ago.  I was there with two of my three brothers and their spouses as well as one nephew, his wife and two little ones.  Our excursion (which I’ll come back to) was part of a larger family reunion on my father’s side of the family near the town of Moosehorn, Manitoba.  In a homesteading place appropriately called, New Home, my grandparents, Samuel and Julianna Drewlo, raised 9 children of their own in addition to two half-siblings. (Grand-father Samuel had married Pauline; she died after the two children were born. Later Samuel died, and Julianna married his brother, Henry, the step-grand-father I remember.)  My dad, William, was the middle child of the nine.  Samuel’s family was one of about 8 other Drewlo siblings of that generation represented at the reunion.

For a variety of reasons, it was the first time we had attended one of these extended family reunion events which happen about once every three years–usually somewhere in Manitoba.  I guess in all honesty, we had never considered it that important.  But more recently we have come to our senses and have realized the value of this sort of thing — not only for our own sakes, but also for the sake of our children, as well as for those who plan these events and all those who attend.  In retrospect, I regret that we hadn’t attended them earlier.  For one thing, we’ve missed out on many years of closer connection with many wonderful people on my father’s side of the family.  The hi-light of the experience was renewing acquaintance with cousins. some second and third cousins, and even one remaining uncle, my dad’s youngest brother.   The planning committee did a great job of organizing meals, and some special events including a tour of some of the local homesteads that had been  settled by our grand-parents’ generation.  We explored the actual site where my father’s family had grown up as well as some cemeteries containing the graves of my grand-parents and other family members.

We toured the New Home Lutheran Church, now a heritage site about 5 kilometres west of Moosehorn. 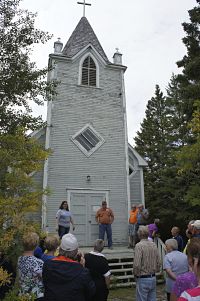 We rang the bell in the belfry and my brother Donovan did remarkably well playing a few hymns on the old pump organ in the balcony.  And we learned some interesting history from the family.  We explored the actual homesteads impressed that some of the original buildings still existed. After Samuel died, his brother, my great-uncle Henry married my grand-mother.  (Henry too had been married previously, but his wife died.  For reasons of decease, he actually married twice before marrying my grand-mother, years after she had finished having her own family.)  Perhaps the matter of multiple marriages was a bit more complicated than it seemed, but this phenomenon illustrates not only the difficulties involved in homesteading; it also demonstrates the care that family members continued to have for one another after their spouses’ passing.  Anyway, as a child I do remember my great-uncle Henry as a gentle big man standing next to my very small and frail grand-mother, probably very much uncle Henry’s senior.  I remember her as a very loving and gracious woman.

As it turned out, my mother’s family, the Gutknecht family (I learned Gutknecht actually means “good servant”) lived some ten miles south of the New Home area, just west of Ashern.  When it came to needing hired help for his farm, Grandpa Gutknecht found the Drewlo boys of New Home filled the bill well.  As a young woman of 18 or so, my mother, Teophelia (who early in life changed her name to Phyllis!), was most impressed with William (Bill).  That romance blossomed into a marriage that eventually gave birth to four sons, I being the third.  Eventually the Gutknechts turned the care of the farm over to my mom and dad which is where I experienced those first crucial years of my life.  And now returning, having many fond memories of life on the farm, I hoped to find some familiar reminders of those years.

But alas, time and neglect had taken their toll so that almost nothing remained of the well-manicured buildings and yard I had known as a child.  Apparently the yard was no longer a residence for anyone — merely a place to park large round bales of hay.  All that remained were a few forms (a grove of maple trees where the house had once stood, some foundation pieces for the big barn, and the same road-way into the yard).  Only one building still endured from the devastation of the years — a small collapsing smoke-house which our family had used to cure pork and other meat products from the farm.  Oh yes, and behind the smoke-house we saw the remains of what we concluded was the top of the old wood cooking stove we had in our home!

One interesting development in my heritage was the influence of the Mennonites on my mother’s traditionally Lutheran family.  Their anabaptist teaching of a warm-hearted personal faith in Christ appealed to my mother’s parents and also to my mother and her siblings.  As a result, subsequent to their marriage, my father and mother took us to a small Mennonite Brethren Mission church not far from our home.  Through that influence, early in our lives, my brothers and I came to experience what we often speak of as “new birth in Christ.”  This experience became formative for our lives directing us ever after toward churches and friendships with a strong emphasis on a deeply personal, Bible-centered faith.  Unfortunately, perhaps quite unnecessarily, this conviction also may have served to distance us from the more formal Lutheran faith of my father’s family.

But at this family reunion, it was time for us to put some of those differences aside, and to appreciate the richness of our broader faith heritage in our father’s family.  It is true that time — sometimes for better, sometimes for worse — has a way of levelling the sharp edges of our memories so that we see the larger picture of what is really important in life.  We can see that the people of a former generation, facing the common difficulties and opportunities of their times, negotiated them with courageous faith and spiritual values that are rich with meaning for our own lives today.   Taking time to return to one’s place of origin can have the profound effect of providing a deeper appreciation for the wonder of God’s marvellous grace and providence.  Certainly, this experience has done that for me.