A Song of Love 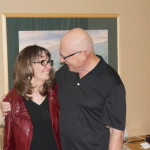 It seems providential that in the ordinary course of my Bible reading and during the exact time of our 45th Wedding Anniversary I should find myself in the Song of Solomon.  It seems deliciously appropriate not only that I should be reading it at this time in our married lives but that this Song also is positioned in what appears to be the very centre of the Bible.  It’s as though the Song wishes to tell us that this is what the Bible and true life is all about — a romantic love relationship.

Of course one shouldn’t miss the fact that the most immediate meaning of the Song is an expression of sweet romantic love between a man and a woman.  The language is that of a deeply intimate physical relationship between two lovers.  But it is not just any conjugal relationship.  In fact the language makes it plain that this is a relationship between one man and one woman who have discovered absolute and exclusive love in one another.  Song of Songs 6:8 quotes the man as saying, There may be sixty wives, all queens, and eighty concubines and unnumbered virgins available to me.  But I would still choose my dove, my perfect one, the only beloved daughter of her mother.

This, of course, can only be the language of what truly defines marriage from a biblical perspective — the devotion of one man and one woman to one another as long as their earthly lives shall last.  It brings to mind the words of Genesis 2:24 where, in the very beginning, God said of such, after creating the first marriage of, For this cause shall a man leave his father and mother and cleave to his wife and the two shall become one flesh.  When and if it comes to marriage at all for any of us, we were made for one exclusive heterosexual commitment throughout our earthly lives.  In the midst of all the current aberrations of sexual pleasure we need to come back again and again to this foundational principle of what God had in mind for marriage from the very beginning.

Some, in this context, will ask about divorce and wonder if there is any redemption of marriage in such an instance.  Though divorce was something far from God’s intention from the beginning (Malachi 2:16) it is evident that He has made provision for divorce in circumstances in which someone has been victimized by a partner’s unfaithfulness (no doubt, because of God’s idea about the significance of “marriage vows” — Matthew 19:8,9).  Through faith in Jesus’ redemptive work, it’s possible for anyone to experience forgiveness from the worst of sins, and to start over — even in marriage.  But this means it’s also possible for God’s grace in Christ to enable a partner to forgive their spouse’s unfaithfulness in marriage — if they are genuinely repentant.

Song of Solomon underlines the basic principle of marriage that it is intended as a romantic relationship.  It is the primary expression of what marriage is all about — a continual feast in one another’s value and beauty that includes many different expressions, such as, actual words of affection, descriptions of one another’s physical beauty, delight in on another’s presence, pride of ownership and status (king and queen/prince and princess), and the mystery and beauty of conjugal love.  Though there are expressions here that may be difficult for us to fully appreciate, there is much with which any two married people of a good marriage can readily identify.

I must confess that the romantic notion of marriage has intrigued and blessed me throughout our married lives.  And as we have grown older in years and in our marriage there is a sense in which the romantic nature of our marriage has grown richer and deeper despite physical changes otherwise.  This is a mystery, I know.  But the fact is, that like an aging wine, the romance of it has a more attractive taste than when it was new.

Of course, even though the first meaning of the Song of Solomon is about marriage as God intended it to be, it points powerfully to the highest love of all — that of the mystery of relationship that God intended to have with his own bride, His church.  In that sense, Song of Solomon emphatically and conclusively points its readers to the very essential nature of the Gospel — that there is nothing sweeter in all the world than the love that has been established between God and His church through the redemptive work of Jesus Christ.  Paul alludes to the mystery and wonder of this relationship by specifically speaking of marriage as an illustration of the way Christ and the church are one (Ephesians 5:32).

I think God’s intention in the Song of Solomon is that He would want us to think of His relationship with His people in romantic terms.  The romance so foundational to marriage is really the way in which we Christians should regard our relationship with God.  Think of the difference it would make in our daily lives if we lived them from the perspective of a romantic relationship with God.  Of course, this can only be so, if we have accepted the redemptive work of Christ in our lives, acknowledging Jesus as the Saviour and Lord.  But once established the relationship with Him ought to be one of delight in one another’s love, don’t you think?  This is the meaning, I think, of that expression in this great hymn written by George Matheson in 1882:

O Love that wilt not let me go,
I rest my weary soul in thee;
I give thee back the life I owe,
That in thine ocean depths its flow
May richer, fuller be.