By An Unknown Path 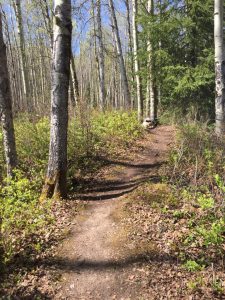 oday, I hiked an area with my “friends” on a path that I had never seen before. It was well-worn, so I knew others had traveled that path before. But today, I didn’t encounter anyone at all. It was a bright sunny spring day when I entered the area by a well known trail. But soon I discovered a route that I had never seen before. It took me up to an area somewhere in the vicinity of the University yet entirely new to me even though it was within a few kilometres of our home.

As I followed the path to higher elevations with its many twists and turns, I really had no idea where I was going or where I would end up. But the well-worn path, combined with the warm sunshine and fresh air were definitely calling me forward. After awhile, I thought I should probably try to retrace my steps, but by that time I had already hiked a good while and wasn’t keen on going back over the path I had already known. I figured the trail had to come out somewhere, and so I just continued on my adventurous journey. Eventually, I came upon an old log house that probably had at one time served as a trapper’s cabin. 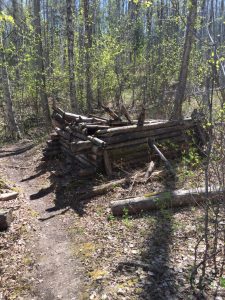 Later, I was confronted by a fork in the path and had to decide whether to go in a direction that seemed to go higher and further away, or in the opposite one that appeared to point more generally to the place where I began.

At one point, I pulled out my GPS to see if I could determine approximately where I was. But alas! The GPS was no help at all. Confusingly, it showed that I was somewhere in the middle of the city. So I decided to continue walking in the direction that I thought would take me closer to the place where I had parked the car. But then I encountered other divisions in the path that called for more decisions.

Eventually, it became evident that I was, in fact, traveling in a direction that it seemed would take me back to my car. I was heartened by the fact that through the trees I could see images of buildings in the valley below. So I knew I couldn’t be too far away from the city. Then too, it seemed the path was leading down hill again, so that was also encouraging. As I kept walking the twisted path, it did indeed come out in familiar territory, and it wasn’t long before I was on an old path that led me to my parked car. What an adventure! I had seen a path and a beautiful part of my “backyard” that I hadn’t known previously even existed. I was glad I hadn’t turned back just because I didn’t know where it might lead. I saw a part of our good land that I had never seen before.

Of course, you know where this is going! As I walked, it reminded me so much about the course of our lives. There is a sense in which none of us knows the path we are taking. Though we may have some sense of familiarity with some parts of the path, there is so much we don’t know about the road ahead. So often the path leads upward, then downward, then this direction, then that! Often there are roots laying across the path, and sometimes even small muddy streams that challenge the way we take. But we follow on, thankful that there is a path, grateful for the knowledge that others have traveled that way before.

Much of life for all of us is like walking a previously unknown path. From a Christian perspective, this is what it means to live our daily lives by faith. We are drawn on that path by a calling to live the adventure of faith in God. The path leads upwards but we really don’t know where it is going, except that we know it is good and that eventually it will lead us to a destination called, heaven. We see there are others that have traveled the path before us, and we are encouraged to continue on by the evidence they have walked that path too. We can see the path is good because of the beauty we see along the way. Though the path is strange to us, we are not lost because we have a pretty good sense of where we came from and where we are going. As Christians, our confidence is not in ourselves, but in the providence of God and a reason informed by God’s revelation in the Holy Scriptures. Some “tools” may be misleading, so we need spiritual discernment of which way is right. In the end, we are blessed with the assurance that God will be faithful to lead us in the path that is right.

It’s true that the path is often fraught with challenges of one kind or another. Sometimes the path is steep, and the twists seem to take us away from where we think we should be going. But we continue on because of the adventure and because we are assured that, in the end, all will be well. We travel in faith and trust. We feel we are surrounded by God’s great love and we have a deep sense of His peace.

Job, of biblical antiquity, described his arduous journey this way: But he knows the way that I take; when he has tested me, I will come forth as gold. My feet have closely followed his steps; I have kept to his way without turning aside. I have not departed from the command of his lips; I have treasured the words of his mouth more than my daily food (Job 23:10-12). Another biblical poet put it like this: You guide me with your counsel, and afterward you will take me into glory (Psalm 73:24).

As followers of Jesus, in many ways we walk an unknown path. But that path is a wonderful adventure, because we walk it in the sunshine of God’s constant love confident that even though there are ups and downs, twists and turns, roots and streams, He will see us through to our destination. And along the way, we have the thrill of experiencing so much beauty which we would never have seen had we never set out on that faith adventure!