Christmas 2020 and The Year That’s Been! 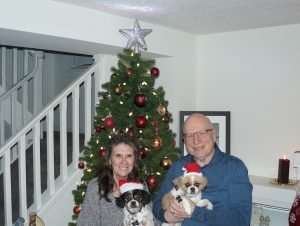 In the quietness of this unusual Christmas season, there is a lot of time to reflect on the year that’s been! For so many of us, because of the pandemic, the year has meant adjustments of many kinds.

In March we were looking forward to making our way to Portland, Oregon to visit our son Michael, his wife Vanessa, and their family for a few days. We even had an Airbnb booked so we could both rest and entertain at leisure. We were within a week of departure for the south when it became evident that any significant travel by anyone was a health risk. So we spent Spring Break at home and prepared ourselves for the new reality. 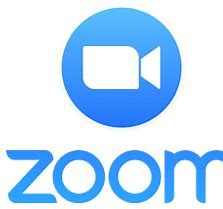 By Easter time in April, the coronavirus prompted the government to limit social gatherings including church meetings. For thousands of Christians everywhere, and for churches large and small, worship became a digital online experience. To prevent spreading the virus, even small groups that ordinarily met for fellowship, Bible Study, or prayer were relegated to connect through Zoom, suddenly the new social media wizard.

Though I wasn’t pastoring in a church at that time, I felt a great deal of empathy for those who were since it meant the loss of face-to-face connection, not to mention the challenge of presenting messages without a physical audience. As it turned out, I had been scheduled by our church to present a seminar on the nature of evangelism in postmodern times, something I had written about in my book on postmodernism a year or two earlier. After many hours of experimenting with different approaches, I managed to record three half-hour sessions for YouTube. Eventually, this stretching experience resulted in a series of three Sunday morning classes called, Engage, which registrants attended through Zoom.

For Carolyn, who had signed on to fill a teaching vacancy in a primary school classroom just before the virus hit, it meant learning how to teach through electronic media. This was an unexpected challenge that she navigated with the help of her wonderful colleagues.

When the year began we were looking forward to celebrating our Fiftieth Wedding Anniversary in August for several days with our four children and their families at a beautiful mountain house at Big White near Kelowna. But that too had to be cancelled, a big disappointment for all of us.

Instead, plans of a different sort began to emerge. Though Carolyn had adjusted reasonably well to the new teaching challenges, by the end of June, despite the invitation to return in the fall, she concluded that this might be a good time to fully retire. And since no further opportunity for transition pastoral ministry had emerged, perhaps this would be a good time to take up our daughter, Heather and her husband Josh’s invitation, to move to their rental home in Calgary, just two blocks from their own. 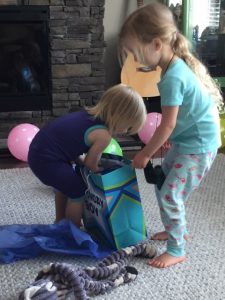 After some contemplation and communication with each of our children, we decided to sell our home and make the move. After getting our house ready for sale, we were able to make a quick trip for a couple of birthday celebrations in Maple Ridge (Stella 4, and Isaak, 2). Providentially, shortly after we left our home and arrived in Maple Ridge, we learned that there had been five viewings and four offers on our home, one even higher than the list price. So even before we arrived back in Prince George, our house had sold!

After much work in packing, donating and selling, on August 12th, we made the big move to Calgary.  Within weeks, thanks to all the extra help from our children, we were comfortably settled. Though we miss Prince George, which had been our home since 1984, we are very happy to be living in this sunny and fascinating city. 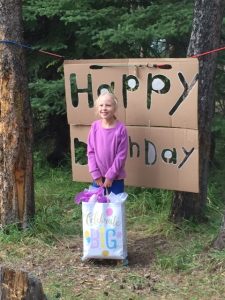 At the time, amidst considerable cautions otherwise, we were still able to have some meetings with family members and friends. Soon after we arrived in Calgary, we went for an afternoon excursion to Nordegg, Alberta to spend some time with our Edmonton daughter Heidi and her husband Nathan and family who were camping there. We celebrated our granddaughter, Mavis’s, 10th birthday and then got ready for our own big anniversary celebration in Calgary. We were blessed by a bountiful basket of goodies from our family delivered to our home, and then a gift from Heather and Josh of a beautiful dinner at one of Calgary’s finest restaurants,

While all of this was happening in our lives, our son Michael and his wife Vanessa living in Portland, decided to put their home up for sale with the thought that perhaps it was time to consider moving back to Canada. When they sold successfully at the beginning of September, they came to quarantine at our daughter, Leanne and husband Ryan’s home, in Maple Ridge. For Michael and Vanessa and their family, Link and Hazel, that began an adventure of online work, school, and travel — first to our families’ homes in Alberta, and then back to the coast in BC. Right now, they are on Vancouver Island, contemplating where in the world they will actually settle in the new year.

At the same time, casually entertaining a connection that had begun even before we left BC, a church in Three Hills, Alberta invited me to consider coming to serve as their Transition Pastor. At the end of September we traveled there for an introduction and by October 1st, I had committed to work onsite for about ten days each month and then as necessary from home for the remainder of each month. I have now completed the first three months of what is proving to be a very delightful yet challenging time of service with the Prairie Tabernacle Church the origin of which is in the well-known, Prairie Bible Institute. Once again, I have the privilege of speaking God’s Word, not only locally but now, due to Covid, to a wider online audience.

This Christmas, as I reflect on the year that’s been, I can’t help but be impressed how, by God’s unique design, things can change so quickly and radically. While the world has been greatly unsettled by the eruption of the coronavirus in a way no one ever anticipated, God has used it to bring very positive changes in very unexpected ways in our own lives too. Though not all together at once, we even got to spend some time with each of our eleven grandchildren and their parents. So, in the end, despite the pandemic, it has turned out to be a beautiful year of God’s direction and blessing.

As those angels promised in the birth of the Saviour in the darkness of that time so many years ago, so it certainly is true that He brings peace to those on whom HIs favour rests as they put their trust in Him. As this year began, we could never have imagined the ways in which God would lead us during this otherwise very dark time in the world. More than ever, it is obvious to us that though there is so much we can’t control or even anticipate, He is faithful to HIs promises and trustworthy in every circumstance.