Christmas in the Dark 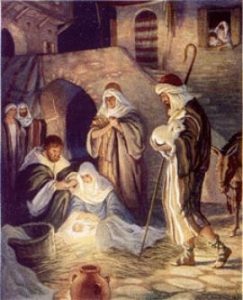 At our pastoral staff meeting today at the Prairie Tabernacle Congregation in Three Hills, AB, where I am continuing to serve as a transition pastor, I felt led to ask the question: what theme from the Christmas story is most dominant for you this year? One answer had to do with the the idea of peace which was announced by the angels to the shepherds concerning the birth of Christ. Another had to do with the reality of the incarnation itself–that the Almighty God, the Creator of the world, the Everlasting Father, should take on the form of a small human baby. It really is all so profound!

For me, the dominant theme of Christmas this year is that Jesus was likely born in the dark of the night, and also in the darkness of the world’s situation. From Luke’s Gospel chapter 2, verse 1, we note that Caesar Augustus of the time, mandated that a census or individual registration take place for the entire Roman world. For Joseph and Mary, because Bethlehem was the Judean place of Joseph’s ancestry, this meant an arduous journey, near the climax of Mary’s pregnancy, from Nazareth in Galilee–a distance of some 150 km. One wonders what their thoughts might have been as they travelled to Bethlehem.

I find the hard facts surrounding the birth of Jesus somewhat parallel to the circumstances that characterize our lives in this time as well. We too are under government mandates unlike anything we have experienced before. We too are finding it necessary this year for a lot of normal activity to be curtailed (like having to cancel a family visit this Christmas). We too may be suffering some of the same kinds of anxiety about the government regulations that Joseph and Mary must have felt. Perhaps the difference for them was that they had no freedom to object to these measures.

But what’s so amazing about that first Christmas story is how God directed the circumstances of that time in order to bring about the birth of His Son just as it had been prophesied (Micah 5:2). Apart from Caesar Augustus’s decree, Mary and Joseph would have had no reason to go to Bethlehem at that time. Had it not been for Caesar’s decree, Jesus may not have been born in the lowly circumstances that amplified the humble meaning of HIs incarnation.

To be sure, these are troublesome days for the whole world mainly because of the pandemic–even worse now with the onset of the Omicron virus just before the Christmas celebrations. Then too, there have been rather unusual, most disturbing, weather patterns in various parts of the world–some of them very close to home. And beyond these complicating circumstances, there are quite a few places of serious conflict in the world that have taken the lives of many and reduced even more to refugee status.

Many of us have been asking questions about the significance of all this. It seems to me, we have been inclined to conclude that all of these happenings, being somewhat abnormal, speak of profound human causes in one form or another–theories of what started the virus and how it is being sustained, theories of human induced climate change, and theories of political maneuvers that have resulted in more relational conflict. And, it’s possible there is some truth in all of these.

But, we would be remiss, I think, if we did not acknowledge that there is a larger Hand in all of these developments that is sovereignly at work to bring about God’s purposes in the world at this time. Just as God guided Caesar Augustus to declare a census in 6 BC that compelled Joseph and Mary to wend their way to Bethlehem for the birth of the Christ-child in that place at that time, so it is, I believe, that God is orchestrating the events of our times in order to bring about His own great purposes in our time.

Based on the appearance of the angel to them in separate encounters, Mary and Joseph, no doubt, had some sense that something special was about to occur in their lives. It would be hard to imagine that they were oblivious to the unusual things that were happening in their lives. But that didn’t mean that they wouldn’t have wondered about the details of how these things would unfold. Similarly, followers of Jesus in our times may have a sense that God is up to something without knowing a great deal about the details of what would actually take place.

Perhaps the best response, like Joseph and Mary, is to relax in the knowledge that God is accomplishing His great purposes through the things that are now taking place. Maybe, it won’t be long before we know more specifically why it is that God has allowed the pandemic, the mandates, the lockdowns, and many other obstructions in our way these days. It’s possible, if we just hang on in trust a little longer, that God will provide a little more clarity about what He’s up to.

At the least, I find it not a little intriguing, how God arranged for the birth of HIs Son in Bethlehem through a mandate that called for everyone to return to the place of their ancestry. Though there is much that is difficult to understand about what the world is experiencing in this time, we can be sure that the One who orchestrated the birth of Christ in Bethlehem with such precision, can do the same for us–if we are willing to trust Him.