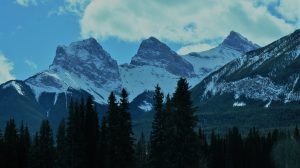 s 13 ends with the words, And now these three remain: faith, hope, and love. But the greatest of these is love.

Recently, I’ve been thinking about the relationship between these three virtues. Somehow, starting with the idea of hope, I landed on a story from Luke 18 about a blind beggar who seemed to experience all three of these. It served well, I thought, to illustrate the difference and relationship between hope, faith, and love.

The blind beggar had been in that condition a long time it seemed. His only way of coping with life was to sit by the road and beg. From the proceeds of his begging, no doubt, he was able to buy some food with which to beg. Or maybe his begging provided food for him directly. In any case, it was a sad way to live. So when he heard that Jesus was coming by that way, it’s not surprising that he looked up in anticipation of some special grace.

It is this sense of anticipation that constituted hope for him. Hope was born in his spirit at the thought that Jesus was coming his way. That’s the nature of hope; it excites a sense of expectation. Hope is an emotional response to the news that something good is possible. Hope is what drives us forward, the emotional motivation to take a certain action. Hope is fundamental to the human experience. Everyday, we all live our lives with a sense of anticipation of that which is good, of that which will be a blessing in our lives. It’s why we get up in the morning, why we go to work, and often the reason we engage in relationships with one another. We can’t live without hope. When we don’t have hope, we lose a reason to live and enter into depression — which is the opposite of hope.

There is a difference, however, between a general sense of hope, and the nature of Christian hope. Most often, in human experience, hope is a general anticipation of the fact that things will turn out alright. Generally, human hope is wishful; it’s that sense that we were made for good. Christian hope, however, is much more specific. It is the anticipation of God’s blessing in an informed way. It is the solid sense of assurance that things are going to go well and turn out really good because of a certain knowledge. And that’s where faith enters the picture.

The man in our story from Luke 18:35-43 had hope because of a certain knowledge he must have possessed concerning who Jesus was and what he knew Jesus was able to do. It was his hope, based on faith, that caused him to cry out for mercy to Jesus, Son of David, No doubt, though he was a beggar, he had a Jewish heritage that taught him about the coming Messiah. And he had come to the conclusion that Jesus was that Messiah. Therefore he shouted out to him as the Son of David for help. And when Jesus heard the man’s cry, he asked for him to be brought to him. Here’s where the story gets even more interesting:

When Jesus asked him what he wanted from Him, the man said, Lord, I want to see. So Jesus said, Receive your sight; your faith has healed you. And immediately the man received his sight and followed Jesus.

So we see that the man’s hope (his sense of specific anticipation) was based upon his faith (his knowledge that Jesus was the Christ and that He could heal him). The nature of faith, which is basic to Christian hope, involves both knowledge and action. If the man didn’t have faith, he wouldn’t have had hope. If he thought Jesus was just another man, he wouldn’t have had hope and then called out to Him. As it was, the man hoped, because he believed. In that way, we see the truth of Hebrews 11:1 that faith is the substance of things hoped for, the evidence of things not seen.

But there is one other element in this triad which encompasses the other two and is the outcome of the first two. It is love! Love prompted Jesus to pay attention to the man. He had come, after all, to seek and to save the lost, to heal the sick, and to preach the gospel of the kingdom. For whatever reason, the other people in the story didn’t have that kind of love. They ignored the man and didn’t think he should be bothering Jesus. They lacked love, but also hope and faith. The blind beggar, on the other hand, having received God’s grace in Christ, immediately began to follow Jesus, giving praise to God for what He had accomplished. And though the people resisted love, faith, and hope, in the end, they also were swept away in the love of God and gave praise to Him.

And it is in that hope, based on faith, that Christians feel loved and have strength to love God both in offering Him praise, and in following Jesus. You can’t have true love without hope and faith. But love is the greatest of these because it will be the outcome and final consummation of all that is involved in hope and faith. In the end, according to 1 Corinthians 13, faith and hope will pass away. Why? Because hope will be realized and faith won’t be necessary. All that will remain is love forever.  Love is what heaven and eternal life with God is really all about. Someday, everything will be encompassed in God’s love. We will live the reality for which we have hoped and believed!