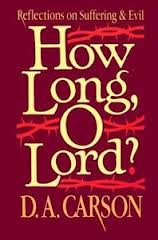 This biblical phrase found in Psalm 6:3, 13:1, and 89:46 is often the cry of our own hearts as we wait for God to act.  It is also the title of a very good book written by Don Carson (Baker Books, 1990).  In his characteristically thorough academic and pastoral style, Carson treats the subject of suffering and evil with unusual candor and grace.  In addition to providing insight on common experiences of suffering including the grief of losing a loved one in death, he attacks the issue of holy wars and hell, suffering in the experience of Job, and God’s experience of suffering.  He also addresses the philosophical question of suffering from the point of view of seeking to resolve the apparent tension between God’s sovereignty and human freedom.

One of the best chapters in the book helps God’s people come to terms with suffering in their own lives.   Carson wrestles with God’s intention and allowance through calamitous circumstances in the Christan journey.  He speaks of Christian suffering as God’s discipline but also as opposition and persecution.  He writes that we should not be surprised by suffering since this is part of what it means to “deny ourselves and take up the cross of Jesus to follow Him.”

Several references are of special interest to those who are in Christian leadership.  He writes that among the people of God, leaders are often called to suffer the most.  This should not surprise us since it was so for the crucified Messiah.  Something we may not have been taught well in seminary is that “there’s a theological tie between suffering and Christian leadership.”  God uses suffering in the lives of leaders for greater discipline.  He notes too that “aggressive witness in an opposing world is likely to bring down peculiar pressures on those who lead the church in witness.”  He also believes that mature Christian leaders are inclined to be willing to absorb more suffering so that their own people may be spared some, not unlike Jesus suffered for us (Colossians 1:24).

He goes on to speak about the way leaders (i.e. Paul) agonize over the difficult things that they sometimes suffer at the hands of their own converts.  “Thus, pastors, and other Christian leaders”, he writes, “must not be surprised by the extraordinary emotional pressures that may befall them, imposed by thoughtless or even renegade church members.  These will rarely be fair; they can be soul-destroying.  But from a biblical perspective, they are scarcely surprising.  To expect them is to rob them of part of their power; to endure them with grace and fortitude is nothing other than following the example of Jesus.”

These are important references in a very good book on suffering that relate to the challenge of authentic pastoral leadership.  It is a great book for any mature Christian who wants to go deeper in understanding the mysteries of this difficult subject.  It is bound to equip readers not only to ward off discouragement about suffering in their own lives but also to help them be God’s gracious instruments of comfort to those who are inevitably afflicted.