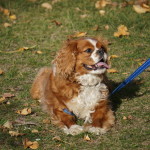 A couple of weeks ago we lost our dog.  I mean that he left us.  He was here, but then he wasn’t.  His body was here, but his life was gone.  He breathed his last.

For the last several months, he was breathing harder.  A visit to the vet confirmed that he had heart-valve problems.  His heart was enlarged and his lungs were struggling for “breathing space.”  We put him on medication to make it possible for his heart to downsize and to work better.  Medication also helped to take some of the fluid away from his lungs.  He did better for a little while, but we knew his early demise was inevitable.

Charlie died on the night of December 5th, 2015.  He was out for the afternoon with his “girlfriend” — a young woman whom Carolyn met in her school work and who fell in love with him.  She often took him back with her to her family home (for “sleepovers”) where he was nurtured, spoiled and very much loved.  Rhonda took care of him for us when we went on trips away from Prince George.  Charlie loved her.  When she came to the door he went racing down the stairs to greet her.  Or when he knew she might be coming for him (because we put his bed by the front door), he would patiently lie there until she arrived.  She was the one who alerted us to his illness.  She even took him to the vet during the night one weekend while we were away, so he could get some relief for his struggle to breathe.

Charlie was a King Charles Spaniel whom we had from the time he was able to leave his mother in Langley.  Leanne and I found him for Carolyn, giving him to her just before Christmas back in 2006.  He was born on October 17th, the runt of the litter.  We loved him from the start.  He was affectionate and loyal.  He was also a bit mischievous — especially when it came to food scraps.  I guess it’s true that we spoiled him a bit.  He did go to dog-training school, but I don’t think he actually passed! 🙂  Or maybe we didn’t do it right.  However, we did find some good ways to manage his lack of inhibition.

Charlie was with us for 9 years.  On the last day, after he came home from being with Rhonda for the afternoon he just lay on the floor for awhile.  (I wasn’t home at that time, so this is Carolyn’s description.)  After awhile he got up and walked around a bit, but then, as he was coming into the kitchen from a little excursion in the bedroom, he suddenly dropped to the floor, his legs splaying out before him and behind him.  Then he lay on his side.  I guess he had a “stroke.”  Carolyn tried to comfort him there.  She called Rhonda, who came back to be with him too.  It wasn’t long after she arrived that Charlie stopped breathing.  A little later his heart stopped beating.  And that was it.  Charlie was gone.

Despite the challenges of this kind of on-going responsibility, we miss Charlie a lot.  He was a presence of comfort and companionship.  He liked to be with us following us around “like a puppy.”  We took him for many long walks, so he provided us with a reason for exercise.  He was a very cute little guy.  Everyone admired his charm.  He had a number of special friends in the community including the Gabriel family who also loved him dearly and sometimes cared for him in our absence.  Jill Bisaro, a university student from Trail, also loved and cared for him a couple of times while we were away.  And then there were our neighbours — Stewart and Corrine who also took care of him.  He also endeared himself to the Hanson family when he sniffed his way to their house just up the street from us.  To all of these we owe our deepest appreciation.

He was also great for the grand-kids.  He loved them and they loved him.  He didn’t usually tire of their attention.  He didn’t bark in the house much, unless he saw his mortal enemy, the neighbourhood squirrel, on the fence through the patio doors.  When we let him out to chase the squirrel he had excessive speed and a very loud voice.

Sometimes he would let us know that a large animal like a bear was outside around the house.  He would then scurry about the house, barking and making a fuss.  Whenever we let him out for his “normal need” we generally put his bark collar on so that he wouldn’t offend the neighbours too much.  It worked by remote control as a beep or a citronella spray — very effective.

I don’t think Charlie will be in heaven — for more reasons than one!  (Though our friend Julie once gave us a quote by Mark Twain which she painted on a t-shirt for me: Heaven is by grace; if it was by merit, you would stay out and your dog would get in.  I guess she thought his sense of morality was better than mine!)  Anyway, from the account of creation in Genesis 1 and 2, it seems that God breathed into Adam the “breath of life” in a way that distinguished him from all the animals.  Furthermore, he was directed to have control over the animals.

Animals are very smart in many ways, but evidently they aren’t given the ability of moral discretion and decision.  They can be trained to do many things, but they don’t have the same consciousness of God or accountability to Him.  There is no eternal future for an animal as there is for immortal beings such as humans.  There will be no resurrection of animals in the same way that such is promised for every person who has ever lived (John 5;28).  Charlie won’t be in heaven, but I am quite sure that there will be similar and better kinds of creatures in God’s new heaven and earth.

For nine years, God blessed us with a pet that so beautifully reflected something of His love and care for the best of His creation — people, made in His image to bring glory and honour to Him through His creation.