The Season’s Beauty and Complexity 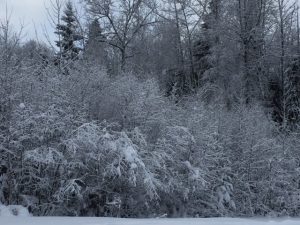 This picture, taken near our home in Prince George in the early days of 2019, is a bit of a metaphor about the world in which we live at this time. On one hand, there is nothing like the beauty of wild nature on a winter day in Canada (or many other parts of the world). On the other hand, the photo is a maze of tangled mysteries that defy quick and easy answers to what’s really going on.

As I write today, I am thinking of a couple of articles that I have just read on social media (Facebook) that make me realize in a new way how confused and confusing today’s generation can be about all that is happening in our world. At the same time, it is evident that God is sovereignly at work in a mysterious and beautiful way to draw everyone’s attention to what’s really important.

One article reflected the consternation of a young writer who is clearly seeking to make a difference in a world that, from his perspective, is becoming increasingly self-centered. I must say that I am impressed by this young man’s zeal for social justice in our world — something that he seems to feel is failing badly because of government or “the establishment.” He suggests that our thinking is being directed more in the interests of financial profit than true human care. But judging from his own commentary and that of so many of the responses, I can’t help but wonder about how all of this measures up with the true nature of the unchanging Gospel of Jesus Christ.

Most of the responses to his simple questions about whether there is hope in this environment, and what we’re going to do about it, boil down to more human effort to work at social justice causes, most often defined as dealing with poverty, a worsening climate, or human trafficking in some form. Responses suggest that what the world needs is more education, better examples, and greater individual human effort.

Another article recently posted was written by a pastor who thinks that the (evangelical) church in 2019 needs to be willing to admit that “it was wrong!” Among other things, the writer suggests that the church should admit it has been wrong about its general stand on abortion, about the role of women, and about sexual orientation. This person’s contention is that Christianity has functioned as a kind of “know it all” about things that in the end are better left as “mysteries of God.” And he appears to be quite certain about that!

While both of these writers reflect a genuine concern for the world of today, it’s evident that they betray a significant lack of understanding about the essential message of the Bible concerning the purpose of the revelation of Jesus Christ. Though there is much in the Bible that inspires inquiry into the mysteries of God and our world, it isn’t actually presented as a textbook about science or social justice. From what I can see, the Bible was never meant to provide a means by which the world could increasingly become more just. That would be heaven on earth. But the Bible doesn’t propose that option.

Rather, the supreme purpose of the Bible is to convey the significance of Jesus — that He came to save the world from its ultimate judgment because of sin, by becoming our substitute for the death we all deserved. By His glorious resurrection, Jesus proved that His claims were true and pointed the way to a future day when those who believed Him would experience the perfection which He represents and that we all seek. The Gospel is NOT that Jesus’ example shows us how we should be kind to our neighbour. Rather, the Good News is nothing less than that Jesus died for our sins, was buried, and was raised again for our justification (before God) — 1 Corinthians 15:1-3.

According to Romans 2:15, God’s moral code is written upon everyone’s heart which is why we all have a social justice conscience. But the solution is not to try harder, or to think that we ourselves are beyond the need for God’s saving grace. Often, when we accuse others of social injustice we betray our own blindness to live successfully by God’s law. God’s saving grace is to recognize that we ALL have sinned and fallen short of the glory of God (Romans 3:23). We can only begin to live righteously when the righteous life of Christ is credited to us, through faith (Romans 4:3- 5). According to the Bible, it is only through a living relationship with Christ that each of us can begin to live out the righteous demands of God’s law (Matthew 5-7).

Concern about social justice is not a bad thing! But for one thing, it’s important to remember that there are many different perspectives on how it might be applied in any given situation.  It is my contention that in the end, “do unto others as you would have them do unto you” (Matthew 7:12) can only legitimately be fulfilled in our lives through faith in Christ and the ministry of the Holy Spirit.