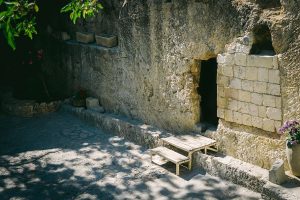 Isn’t it glorious that Easter this year, falls in the very midst of this world-wide plague! While the world is faced with the reality of death in this unprecedented global way, Easter comes to it with the most wonderful news imaginable — death has been defeated in the resurrection of Jesus Christ! Due to circumstances and timing, this news comes to us much louder than normal. God wants the world to know that our worst possible enemy has been completely routed!

Extreme folk-views of Easter think of it merely as an expression of spring or the abundant reproductive capacity of rabbits (i.e the classic Easter bunny with its basket of eggs). But this year, because of the Coronavirus pandemic, it’s possible the world will be more attentive to the real meaning of Easter. Rather than hope for spring, or as a mere wish for a return to normalcy, people will grasp the wonder of the true hope that is found in the astounding events of that climactic Passover in Jerusalem at the beginning of the First Century.

It’s not surprising that the Church has always regarded the events of that Passover as the hinge-point of human history. All of Hebrew history as described in the Old Testament Scriptures, looked forward to a day when the Messiah would come to conquer evil and set everything right. When Jesus arrived and began his heavenly kingdom work it was evident that he was the fulfillment of that expectation. Yet it was the spiritual darkness surrounding his very own people (typical of all of humanity) that ultimately led to his horrible death by Roman crucifixion.

But, in the most amazing twist of destiny, Jesus’ death turned out to be the occasion for the greatest victory the world has ever seen. For centuries prior, the Israelite community had been practicing regular animal sacrifice as a means of expiation for their transgressions against God’s moral law. Yet, in themselves, these sacrifices were incapable of affecting true holiness in the lives of those who practiced them. As the writer of Hebrews puts it, It is impossible for the blood of bulls and goats to take away sins (10:4). That is why Isaiah, some 700 years earlier, prophesied about “someone” that, He was oppressed and afflicted, yet he did not open his mouth, he was led like a lamb to the slaughter, and as a sheep before his shearers is silent, so he did not open his mouth… for the transgression of my people he was punished (Isaiah 53:7, 8). Much later,  in fulfilment of Isaiah’s prophecy, John the Baptist identified Jesus as that Lamb of God who takes away the sin of the world (John 1:29).

Good Friday, continuing as a Canadian National Holiday in honour and remembrance of Jesus’ crucifixion, speaks to the ongoing Christian influence in our nation. Good Friday marks the historical and theological climax of Jesus’ incarnation to be God’s sacrificial lamb for the satisfaction of God’s judgement on the sin of humanity. When Jesus said, It is finished (John 19:30), and then breathed his last, those words signified profoundly that humanity’s great moral debt had been paid in full. That act of God, and the Son’s willingness to lay down his life, represent the greatest expression of love the world has ever known. Good Friday is ’cause for great pause’ in remembrance of what transpired there for all of us. That is why, of course, the day is called, GOOD Friday.

Ironically, most of the world, in its ignorance or arrogance, will simply regard Good Friday as yet another occasion to do whatever its people please. But for those who have become believers in Christ, the day can’t help but be one of deep reflection, thanksgiving, and praise — especially in the knowledge of what also happened on the Third Day following his death, and especially in this time of global sorrow.

If Good Friday represents the absolute pinnacle of the reason for Jesus’ earthly visitation, then the Sunday following is the grandest authentication of Jesus’ whole life and service. Over the years, it has been shown repeatedly that the four Gospel accounts are reasonable and reliable records of what actually happened in the physical resurrection of Jesus from death. But surely one of the greatest testimonies to Jesus’ conquest is the existence of the Church in almost every corner of the world today. The good news of Jesus’ vicarious death and resurrection has turned tens of millions from subtle (or overt) rebels to confessing Christ-followers.

Faith in the truth of Jesus’ death and resurrection is the reason why Christians are characterized by hope even in the darkest times of human history. That hope is based on the conviction that God is good and that he is ultimately in control of all that happens in the world. Christians have the assurance that in Jesus’ death and resurrection, sin and evil have been fully and forever conquered.

But, of course, this conclusion begs the question about the world’s ongoing anguish. The short answer is that suffering continues only because of Satan’s remaining struggle against God, because of the ongoing resistance of those who do not believe (with whom he is incredibly long-suffering), and because it is a useful tool in God’s hands for refinement in the lives of Christians. Though Satan and evil were vanquished in Jesus’ death and resurrection, this victory won’t be fully realized until the Grand Windup prophesied throughout the Scriptures and more fully described in the Book of Revelation. Jesus’ triumph in his death and resurrection was really the proverbial “final nail in the coffin.”

This Easter is an occasion for more hope than ever because the world is suffering more than ever. And that suffering is real despite the fact that some are inclined to minimize the importance of the current restrictions. Many lives are being lost around the world due to the virus. Just yesterday it was reported that more than 100 doctors have now passed away in Italy due their work with patients suffering from this disease. So many large populations in poor nations of the world have little means of defence against the onslaught. Added to the direct effect of the disease is the personal loss of income for many based on work restrictions for the sake of the disease’s containment. And without an immediate remedy, no one really knows how long this pattern might continue. Easter’s hope doesn’t minimize the fact that many are suffering very personally during this time.

But in the midst of the suffering there is real cause for hope in the Easter story. The first reason for hope is that God promises  good even in the worst circumstances for those who put their trust in him (Romans 8:28). For them, hope is real because they believe that nothing can possibly separate them from the love of God shown in Jesus (Romans 8:38,39). The second reason for Easter hope is because those who believe know the worst possible outcome, death, has been conquered in Jesus’ own resurrection from the dead. Death, if and when it happens, is merely a passageway into an eternal heavenly existence. As the Apostle Paul wrote, Now we know that if our earthly tent we live in is destroyed, we have a building from God, an eternal house in heaven, not built with human hands (2 Corinthians 5:1). And the third great reason for Easter hope is because of what Paul refers to as “the blessed hope” — the prospect of the ultimate glorious appearing of our great God and Saviour, Jesus Christ (Titus 2:12).

The truth is that, like Jesus, his followers also live in two different worlds. They weep with the sorrowing, just as Jesus did (John 11:35), because they themselves know about suffering in many forms. Certainly this has been true for me. Over the years, as for everyone, there have been instances of real loss and disappointment. But, again and again, what has sustained me and given me courage is the assurance of Jesus’ victory over sin and death. Even in the face of great suffering, there is good reason for optimism. So, even in this rather dark season, it’s possible to be among those who genuinely proclaim, HE IS RISEN!

(Note: for email notices of additional Blog articles as they are posted, please provide an email address. Simply check the box “Notify me of new posts by email,” and click on “Submit Comment.” Then add email address. Thank you for your interest.)