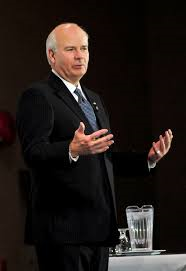 I didn’t see it, but on Sunday, March 11th, the Academy of Canadian Cinema and Television honoured former CBC news anchor, Peter Mansbridge, with the Lifetime Achievement Award. What was noteworthy in the presentation was Peter Mansbridge’s acceptance speech in which he spoke of the special challenges that the journalism profession faces today. Among other things, he made a point of noting that, “the very principle that we stand for is under attack. Truth is under attack.” He went on to say that, “…nothing is more sacred in our industry than the truth… nothing is more important than the defense of the truth and that journalists need to risk everything to defend the truth.”  The speech is well worth viewing because of its main theme.

Speaking as a world class journalist, Peter Mansbridge needs to be commended for his strong expression of commitment to the principle of truth in the whole business of journalism. It is admirable that journalism diligently seeks to represent the truth in all of its work. And there is no doubt that this is what the public looks for among journalists of every description. It is a noble profession which we should value highly when it is taken seriously.

But the speech ultimately raises the age old question, “What is truth?”. For Peter Mansbridge evidently, the issue of truth comes down to the question of facts. He says, “we need to fight injustice with facts, and we need to battle bullies with facts!” The irony in this statement is that he is moving beyond the issue of facts, to make a judgement statement that obviously has a political purpose. And it illustrates the problem that journalists face all the time — the perspective of facts that they share and how those facts are interpreted.

It used to be that journalists had a much easier time because everyone took for granted that journalists were able to determine the facts. But in these post-modern times the focus has changed. Today, everyone tends to be suspicious of the perspective provided, not to mention the interpretation given. This makes the work of journalism especially challenging and open to the charge of something we never heard of before — fake news.

I loved Peter Mansbridge’s speech because it fits in so well with how we who are of the Christian faith think. If one didn’t know the context of the speech, or the source, one might have concluded that it was a short sermon or devotional in a church. (I encourage the reader to listen to it as though it was presented by a strong Christian.) Because this is exactly what Christians believe about the truth. We believe that truth exists as an objective reality outside of ourselves because God exists apart from human experience — that He is transcendent or completely separate from His creation. Real truth is God’s perspective on any particular event. And thankfully, the most important truth has been given to us through the Holy Scriptures and through His Son, Jesus Christ.

Nevertheless, the difficulty for us Christians in these postmodern times is not unlike that of the serious journalist: How do we effectively communicate facts (God’s perspective) without making judgments that potentially misrepresent Him? Yet representing Him accurately is exactly what we are called to do. In our representation of the truth as shown to us in the Scriptures, it is important that we not simply represent our own perspective or provide our own interpretation. The challenge, especially for pastors, teachers, and preachers in these times, is to speak on God’s behalf according to His will.

This issue of diligently representing the truth in these postmodern times is really the subject of the book that I have published recently called, Thoughtful Adaptations to Change. It’s all about the cultural changes that have taken place in western society in the last fifty years, and how we can live authentically as Christians in these times. You can find out more about the book on this web-site, or in stores in Prince George (Coles, Books and Company, King’s In) or at the House of James in Abbotsford.

Thank you, Peter Mansbridge, for your stirring speech that draws attention to the importance of the defense of truth — for the world and especially for those of us who are Christians. I couldn’t have said it better myself!