When It Seems God Has Left Us — Psalm 44 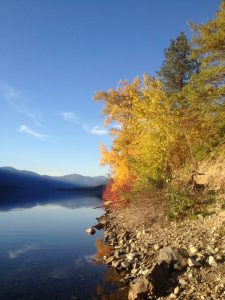 This photo is a prize — a shot taken by my friend, Alfred. It’s the shoreline of Christina Lake in southern British Columbia, Canada. Part of the reason for its appeal, I’m sure, is the variety of colour and contrast — different hues and shades of the primary colours — so typical of fall in western Canada. Another appeal, I think, is the contrast between the immediate and the distant.

Sometimes, it’s difficult for us to appreciate the true beauty of our experiences of faith until they are seen from the perspective of a larger view. Take the 44th Psalm, for example. As I read the Psalm this morning, I thought it was strange in so many respects until I took a closer look and considered it in the light of the whole of sacred Scripture.

Psalm 44 begins with a wonderful description of God’s gracious help against the Enemy in the early days of Israel’s existence. Those who know this period of the Old Testament text — from Exodus to Joshua — know that God used Israel to be God’s means of judgment on the nations that had forgotten Him and become genuinely irredeemable in the depth of their paganism. Not only is it a great lesson in the certainty of God’s ultimate judgment upon the full extent of human depravity, but it also demonstrates how God is able to redeem the land in these circumstances for His higher purposes. In this case, His purpose was to literally give the land to His own people. In these first eight verses of the Psalm, the writer is overwhelmed with the strength of the Lord on behalf of His people. These eight beautiful verses could easily be the theme of every Christian’s story of redemption!

But then, there is this sad section in vss. 9 – 16, in which the same writer describes a scenario in which it seems that God has now rejected them because of the Enemy’s victories over them. The contrast is palpable! The beautiful note of triumph in the first eight verses is turned into a dirge of utter failure and defeat in the next eight! Instead of going out with their armies, Israel feels that God has abandoned them to their foes. The triumphant sounds of victory have been replaced with mutterings of scorn and derision. Shame covers their faces and they have become the world’s laughingstock.

And it gets worse: all this has happened EVEN THOUGH Israel has not forgotten God and been unfaithful to Him. The testimony of this writer is that Israel had not turned back or departed from God’s ways. If, in fact, the nation had turned away from the Lord and been unfaithful to Him, God’s rejection or abandonment (at least for a time) would be understandable. And, besides, God would know that it was so, for He knows the secrets of everyone’s hearts. (And, to be sure, there were many instances in the life of the nation of Israel when judgment came its way because of overt sin.) But such has not been the case in this instance. Instead, the writer says, they are like sacrificial lambs. And so he pleads for God to hear his prayer, to awake like One out of sleep, and to be their help — for the sake of HIs own steadfast love!

At first reading, it’s easy to conclude that there may be some injustice on God’s part with respect to how He relates to His own people. Or one might at least conclude that He is somehow capricious — acting one way at one time, and then almost forgetting about them in the next! Or maybe, Israel has been guilty of serious wrong-doing without really being aware of how it/they have offended God. Is it possible that God has forgotten, that He is preoccupied with other things, that He has somehow abandoned them in their greatest time of need?

But then, as I thought of the Psalm more deeply, I began to recognize that there are other instances in Scripture where it seems that God abandons His people because He is accomplishing a higher purpose. I thought of Job, for example. Here was a man who was severely tested to the point of losing all but his very life — all the while being admonished by his friends that his trials were due, somehow, to his own sins. But, just as the writer in this Psalm, Job maintained his innocence and trusted His God to justify him — which He eventually did. I thought too of Jesus, who in the time of His greatest trial, felt that His own Father in heaven had abandoned him. But what seemed like God’s utter rejection of His own Son, was really the point of God’s greatest victory over the Enemy of our souls — because Jesus was being offered as a sacrifice for the sins of the whole world.

Though the Christian life involves experiences that can only be described as evidence of the very presence and power of God at work on our behalf, there are other times when it seems He abandons us — even though we are not aware of wrongdoing and have walked in faithfulness with Him. There are days in the Christian life that can only be described as, “the dark night of the soul.” A larger view of God’s ways assures us that God has not forgotten or abandoned us at all. He has simply withdrawn in order to accomplish a larger purpose in our lives — often leading to eternal salvation in the lives of other people. And so it is that Paul is able to say in Romans 8 that while nothing can ever separate us from the love of God in Christ Jesus, there is a sense in which we are killed all day long and counted as sheep to be slaughtered. It is the way of the cross for the sake of God’s redemptive work in the world. We are contending with the Enemy of our souls through sacrifice. But even in these experiences, we are more than conquerors through the One who loved us and gave His life for us.

The long view concerning faith in Jesus Christ reveals a far more beautiful picture of God’s dealings with His people than is visible from being too close to the picture. Though difficulties may sometimes arise because of particular sins that need to be identified and forsaken, they also come because God is doing something more amazing that only heaven’s glory will reveal!