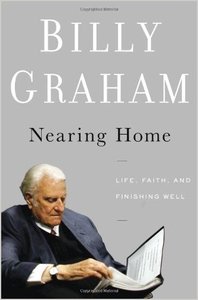 This summer, for a variety of reasons, I’ve been thinking quite a lot about the brevity of our lives and the aging process.  Maybe it’s because I’ve just passed some important milestones in my own life.  Also it may because this summer especially I’ve noticed the cyclical nature of life in the seasons, the passing interests and activities of people, and the rise and demise of generations of people.  Increasingly too, one of my favourite books of the Bible is Ecclesiastes where the writer, Solomon no doubt, reflects on the emptiness of life in our sin-cursed world, and our desperate need for God’s grace and wisdom which he says is possible to experience through “the fear of the Lord.”

While these thoughts had been going through my mind, I stumbled upon a book by Billy Graham entitled, Nearing Home.  Few people have had as profound an impact upon the world and the church in the second half of the last century as Billy Graham.  His life and ministry was a modern phenomenon for the people of my generation because of the large numbers of people who heard him in his evangelistic crusades around the world.  His child-hood dream of playing major league baseball before stadiums full of endearing fans was actually fulfilled as a preacher of the Gospel in those same stadiums — not only in America but in almost every major city of the world.  For five decades Billy Graham has been an icon to the church of evangelistic theology, commitment and fruitfulness.  For Billy Graham and many of us who have lived and served in the church during this time the Bible teaches that people come to personal assurance of eternal salvation through a faith response decision of their heart and mind (expressed in a simple prayer) to the truth of Christ’s death and resurrection for their sin.  “For God so loved the world that he gave his one and only Son, that whosoever believes in him shall not perish but have eternal life” (John 3:16).

But times change, and people who have been stars grow older and recede.  Billy Graham, now in his early mid-nineties, is rather frail and suffers from Parkinson’s disease.   It is hard to believe that this man whom God used in such a mighty way in the second part of the last century is slowly receding into history.  He held his last major Crusade in New York City in 2005.  Though the Evangelistic Association he began still exists, he has passed on the baton for this ministry to his son, Franklin, whose growing evangelistic ministry is taking a different form.

But what’s amazing about Billy Graham is that he is still active in seeking to point people to believing and following Christ, despite his age.  Hence this book which he just completed in his 93rd year.  I bought it partly because I thought it might be his last (though somewhere I read that he’s working on another one).  The book is a realistic look at the challenge of aging.  It is a confession about how little thought Billy Graham himself gave to this important aspect of our lives.  In his Introduction he concedes that his whole life was devoted to learning how to die as a Christian, but never really understanding how to live in the years before he died.  He says he never expected to live as long as he has, especially out-living his wife, Ruth, who died four years prior to the writing of this book.  But the book is about how he’s learning to cope and appreciate the importance of growing old gracefully.

Many of us are so focused on making a living and getting the most out of this life that we never think seriously about the aging process and the blessings that come with older age.  Nearing Home is a realistic appraisal of this experience for which all of us need to prepare.  The book is full of stories and illustrations from Graham’s own experience about aging.  He writes practically about preparing for retirement, making the most out of it in terms of investing in the lives of people, and preparing for the eventuality of our passing.  He also has a lot to say about the value of grieving and the anticipation of heaven.  And of course, as we might expect, Billy Graham, in his inimitable style, shares liberally from the Bible and especially how anyone can experience the hope of eternal life.

It’s good for us all to be reminded from time to time that we’re not going to be young forever.  In fact, the reality is that youth is an incrementally fading thing for everyone.  And as Ecclesiastes exhorts, we should do everything we can to think about our Creator while we’re still young since we all will be facing the reality of our demise sooner than we can imagine.  Nearing Home, for me, was soberly encouraging, because it made me recognize anew the reality of my own mortality and how to prepare for it.  I think it would be a good book to read sooner than later, partially in respect for a man whose influence was profound and whose wisdom is self-evident.