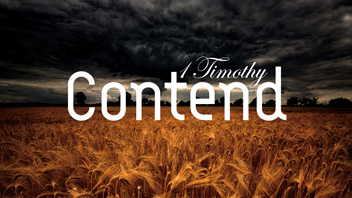 It isn’t often that I reference an entire sermon on this site, but am happy to do so in this case because of how well it is presented especially in view of the subject matter.  Though there is an abundance of words, good preaching these days, it seems, is rather rare.  It is a very special skill that requires a good balance between faithful exposition of the Scriptures and pastoral sensitivity.   In my view, it should not only have within it a sense of passion but also a good deal of substance in terms of biblical content and rational.  My bias in good preaching is toward teaching.  I look for a good explanation that appeals as much to the mind as to the heart.  Spirit-anointed preaching, I think, has a salutary effect; that is, it has a bit of a bite to it.  It is bold and speaks to the consciences of people’s hearts.  That is what I would call the prophetic element of preaching.

A good example of the kind of preaching I’m speaking about is a sermon that was delivered at Northview Commnity Church in Abbotsford, BC on Sunday, May 19, 2013 by Pastor Jeff Bucknam on a very controversial passage and subject.  The considered passage was 1 Timothy 2:11-15 in the context of, it seems, a series of expositional messages on First Timothy.  Bucknam is the senior pastor of the church, one of the largest in the Canadian Mennonite Brethren denomination.  Pastor Buchnam, I understand from the web-site, has come into this role in recent years having served previously as one of the church’s associate pastors.  Originally a graduate of Dallas Theological Seminary, he more recently earned a Doctor of Ministry degree from Talbot School of Theology.

In this particular sermon on what he believes the Bible has to say about women in church leadership, he provides a strong case for the position held by orthodox believers throughout the history of the church.  Only in the last 30 – 50 years has there been a major departure from this position no doubt largely because of the influence of feminism in popular culture. The position of the church throughout its history has been that God has ordained that the church be led by qualified men.  What is interesting about this sermon is that it is presented in a reasonable manner against the tide, not only of popular cultural opinion but also of much church ministry direction in these days.  I admire the boldness of this pastor as well as the patient and rational manner in which he explains his thesis.

Without further comment, here is the sermon: https://vimeo.com/66687724.   (Please note the laughter at the beginning right after his invitation to pray, implying that the prayer and possible joke have been cut from the video.)  Take a listen and consider it from the perspective of preaching in general, faithfulness to the biblical text, and grace of delivery.