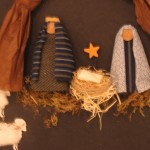 Today is the beginning of what is known among Christians as the Advent season.  It marks the beginning of the celebration of the first coming of Jesus so many years ago.  The word itself means “coming” or “arrival” and focuses in on the sense of expectation about the coming Messiah among the Jews.  The theme of anticipation regarding the coming of one who would bring liberation to his people is prominent throughout the prophetic element of the Old Testament Scriptures.

Many references are very specific, the first one being evident in Genesis 3:15 just after the temptation and fall of Adam and Eve in the Garden of Eden.  Sometimes called, the proto-evangelion, because it is the first reference to the good news or Gospel in the Old Testament, in it God promises that the offspring of the woman (through implied suffering)  would eventually crush the head of Satan.

One of the most favoured prophetic references to the coming of a Messiah is found in Isaiah 9:6, 7.  For to us a child is born, to us a son is given, and the government will be upon his shoulders.  And he will be called Wonderful Counsellor, Mighty God, Everlasting Father, Prince of Peace.  Of the increase of his government and peace there will be no end…

It is hard to imagine what this sense of anticipation meant to many of the Jewish people throughout their history.  We get some hint of it in the words of the old man Simeon who was waiting “for the consolation of Israel” (Luke 2:25).  Having anticipated the arrival of the Messiah before his own death, Simeon was now prepared to be dismissed from this life, for my eyes have seen your salvation, which you have prepared in the sight of all people (2:30,31).

It is interesting how the Advent season each year emulates this sense of anticipation as children and adults wait in expectation, perhaps for different reasons, for the arrival of Christmas.

But the Advent season also hints loudly at the anticipation of Jesus’ Second Coming.  For while it is evident that Jesus’ first coming did fulfill the promise of a coming Saviour it is also clear that the final chapter of his coming has yet to be written in his Second Coming.

The reality of this expectation came home to me with new force this morning as I read Jesus’ own words about his Second Coming in Mark 13.   What is outstanding in this chapter is the very clear description of the signs and suddenness associated with this coming.  While it is true that a minor fulfillment of these signs may have already happened during Jerusalem’s fall to the Roman emperor Titus in 70 AD, there is no doubt that these words await a much greater completion.  I am especially impressed with Jesus’ strong words to be ready for his sudden return.

The main point of what I am writing is that in the same way that many people kept looking forward to the Messiah’s first arrival and were not disappointed, so we would do well to live in the reality of this very specific prophecy concerning his Second Coming.   Regarding Christian living this calls for vigilance about the quality and genuineness of our own faith.  With regard to Christian ministry and service, it means that we need to be preoccupied with God’s grand purposes and the activity of Jesus – announcing and demonstrating the reality of the Good News (Matt 9:35).