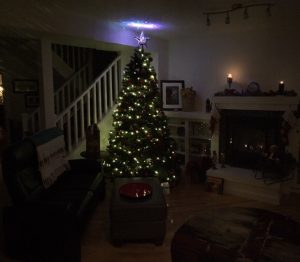 Today, November 29th, is what is known as the First Sunday of Advent, a term which refers to the great sense of anticipation surrounding the expected coming of the Christ. Though the weather in Calgary, Alberta, where we now live is usually sunny, today it is cloudy with its seasonal sub-zero temperature. The mood created by these conditions is just a bit somber and even sad, but also quite fitting in view of what the world is experiencing otherwise this year due to the Covid pandemic.

It is the first Christmas in my memory to be enshrouded with an unusual sense of gloom. For as I write, it seems the whole world is suffering, not only from the actual loss of life due to the disease but also from its ominous threat. Restrictions have been more or less imposed by governments everywhere in order to curb the spread of the disease. Small businesses especially have been deeply affected, many to the point of closure and bankruptcy. Personal social interaction has largely been reduced to virtual media of one kind or another. Even families are no longer able to visit with one another in their homes. The social isolation of these times has deeply impacted relational and mental health. There is little doubt that the general sense of the world’s darkness has been significantly amplified this year.

On one hand, all of this is a reminder that our world really is a very dark place. In the ordinary circumstances of our relative sense of ease and prosperity it’s easy to forget that we live in a rather inhospitable world. Not far below the surface of much of our merrymaking and child-like laughter there often lies a nagging sense of sorrow and sadness. We feel it in our bones; we see it in our faces. Despite all of our abilities and accomplishments we can’t help but feel our limitations.

In this context, it seems appropriate that during the last month or so, I’ve been devotionally immersed in the book of Job. In this oldest of sacred Scripture we learn about a righteous man who experienced all the trouble that Satan could possibly throw at someone apart from death itself. In the book we learn Job’s troubles are not due to his sins as his “comforters” suggest, but because of the testing God allowed Satan to apply in his life. Understandably, Job is often confused and deeply discouraged by all that is happening to him. But because of his steadfast faith he is able to retain his innocence even in those dire circumstances.

Not surprisingly, the climax of the Book of Job comes in the final chapters where God makes Himself known to Job at the end of his long season of trial. His friends, it seems, tend to measure wisdom, the book’s theme, by the old human means of self-righteousness. But Job seems to realize that true wisdom ultimately rests in a resolute sense of faith, something clarified in the rather central 28th chapter of the book. The universal quest for wisdom, he writes, is discovered in what is called, “the fear of the Lord.”

So what does all of this have to do with Christmas in 2020? Simply this: the book of Job amplifies the reality of suffering in the world caused by Satan. In a sense, like other pieces of biblical wisdom literature, it is a commentary on the world’s plight due to Satan’s original challenge of God in the Garden of Eden. God allows Satan’s plan to test those ordained for righteousness through faith. While the world suffers in spiritual darkness because of Satan’s activity, the righteous prevail by faith because of, and in anticipation of the full revelation of God’s glory.

In the midst of the darkness of the world in these times, perhaps the revelation of the glory of God in the coming of Jesus Christ will shine brighter than ever. In the words of Romans 5:20, where sin increased, grace increased all the more. The darkness that has come over the world due to Satan’s activity through the transmission of such a deadly disease may be great, but God’s grace in the revelation of HIs Son who has overcome sin and Satan is even greater.

Hopefully, this will be a very memorable Christmas for many, not because it affords the usual opportunities for social gatherings, but because the reality of Jesus’s coming into the dark world of his time, will stand out in bold relief concerning the offer of God’s gift of grace through Christ in our dark time. May God’s glory shine through the gloom of our time more powerfully than ever this Christmas.