For Such A Time As This 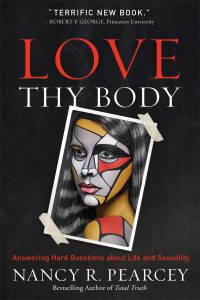 I know of no book, regarding human sexuality, that articulates the great divide between secular and theistic thinking  better than this recently published (2018) masterpiece by Nancy Pearcey.  Recently serving as Scholar in Residence at Houston Baptist University, Pearcey writes from the perspective of one who once identified as an agnostic but later came to embrace a Christian worldview, partially through participation in the scholarly Christian community of L’Abri, Switzerland. (L’Abri, which means “shelter” or “haven” was established by Francis and Edith Schaeffer in 1955 as a hostel for travellers to discover faith in Christ amidst their philosophical questions.)

What’s remarkable about the book is its excellent description, compassionately presented, about the philosophical divide that has come to exist between the theistic and secular worldviews. As far as western society is concerned, this great divide began in the modern period when science suddenly became the means of human self-sufficiency. At that time, through the influence of philosophers such as Immanuel Kant and Søren Kierkegaard, faith was deemed to have no relevance to “the real world,” because it was unrelated to “facts.” Yet, it can be easily shown that the well-preserved Biblical record, which is foundational to faith, despite its miraculous element aligns perfectly with the facts of history and the natural world.

Secularism, then, is simply the view that the human body is but an extension of the material world without any connection to the spiritual world.

But a theistic worldview insists that the material world is very much related to the spiritual dimension by virtue of creation. By this view it is evident that the material world is structured with great precision at every level (cells, the human body, nature, the universe) due to the intention of the original Designer. (In the arts, we might think of this difference in terms of music vs noise, or image vs blurr.) From this perspective, the material world is not a chaotic mass of material substance with which we can do as we please — the product of an indiscriminate evolutionary process; instead it exists as it does because of the Designer’s intention.

It’s not surprising then, that the prevailing secular world view of our times, proposes that we can do with the human body whatever we wish, simply because it has no relevance to a higher purpose. By this view, sexuaity can be expressed in many different ways as long as it satisfies, for the participants, some immediate sensual appetite. According to Pearcey, it is this total disregard for the higher spiritual dimension in our increasingly secular society which is at the root of the incidence of hookup sex, abortion, pornography, homosexuality, euthanasia, and transgenderism.

Theists, on the other hand, insist that the structure of the human body reflects God’s intention that it be used in a particular way. For example, men and women are sexually different because the Designer intended them to function for the purpose of lifelong complementary companionship and reproduction. Theists believe that the nuclear family by original design, beginning with the formal union of a man and woman (marriage), is the most basic way to socialize and educate children.

According to Pearcey, the aberrations from God’s original design for sexuality that are being promoted in our day, are due to this secular view that has reduced the world (and the body) to a mass of material cells devoid of any relation to the spiritual/moral dimension. Pearcey’s book takes a deep dive into the implications of this societal trajectory.

When it comes to homosexulity, for example, Pearcey treats the issue realistically and compassionately by acknowledging that a predisposition toward aberrant sexual behaviour is possible for a whole variety of reasons — just as in the case of other psychological propensities (such as depression or alcoholism). The problem is that people begin to justify any social anomaly by insisting it is who they are; it is their “identity.”

But Pearcey points out that this conclusion is really a psychological game that pits one’s emotions against physical reality (i.e. homosexual desire conflicts with the very structure of the human body). Furthermore, she shows that feelings, including sexual ones, are fluid in a way that can easily be influenced by external social factors. That is the reason, for example, that people can, and often do, change their sexual preferences. She even quotes practicing homosexuals who acknowledge that they can no longer hide behind the ruse that this is “just the way I am.”

In one way or another, she proposes, in the matter of sexual practice, we end up choosing what our minds tell us is acceptable. This means that though changing our minds about an undesirable practice may not be easy, with the proper intervention, it is not impossible. In this context, Pearcey reminds readers of repentance and redemption through belief in the Good News about Jesus. We all know that when temptation persists in pushing us to do what is morally wrong we have a responsibility to resist. Biblically we know that God’s strength is readily available in such a time, if we actually want it!

Pearcey’s book demonstrates the application of these mind/body principles to a wide variety of sexual questions in our day; hence the subtitle of the book: Answering Hard Questions about Life and Sexuality. To say her book is timely is an understatement, because we all know how those who stand for a theistic worldview of human sexuality are subtly and steadily being squeezed to conform to the secular worldview.

If ever there was a time to speak out against the destructive philosophies and practices of the secularists, it is now! But this may require more than pat answers to the age-old questions of morality. Pearcey’s book, I believe, provides a well-researched and thoughtful response about how to sensitively, creatively, and credibly engage in this important discussion with a view to personal, political and societal reform — for good.