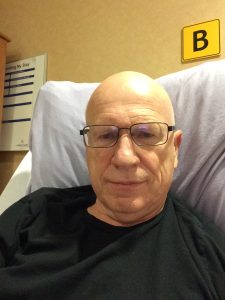 Recently, I was surprised to find myself on a gurney in the Emergency Ward at the University Hospital of Northern BC in Prince George. I admitted myself to this facility on a Friday afternoon in the third week of January after experiencing unusual chest and left-arm pain. . Suddenly, while enjoying my lunch after a rousing squash game with a friend, a dull pain started rising in my chest. I was still experiencing it about a half-hour later when my wife, Carolyn, came home from her visit to the gym. When I told her about the pain, and because I had experienced something similar less than a week earlier after leading my last Service as a Transition Pastor at the Nechako Community Church in Vanderhoof, we both agreed that I should probably check it out. So after a brief prayer together, I headed to the hospital thinking a quick check would enable me to return for the delicious evening meal Carolyn was preparing.

It was significant that the Admissions staff at the hospital wasted no time in acquiring the usual medical attention that someone in my circumstance needed. Evidently the monitors of my cardiac activity didn’t show anything too unusual. And even the initial blood test seemed fairly normal though also confusing. So they took a couple of more blood tests and a medical team determined that enzyme levels were rising slightly indicating to them that probably some heart damage had occurred. I was a little uncomfortable about the fact that they wanted to keep me for the night to do further tests and to study what to recommend. My wife, who was expecting me home early in the evening was also surprised by these developments. But the worst was that the internal medicine specialist came in early the next morning to say that they had come to the conclusion that I had indeed suffered a small heart attack and that they were going to recommend receiving an angiogram to determine the extent and reason for the damage. It meant, he said, that I would have to stay in the hospital until they were able to secure a room at a cardiac treatment facility in a hospital in southern BC.

Later that Saturday, they transferred me to a room on the internal medicine unit of the hospital. The blessing was that the room turned out to be a corner unit with tall, wide windows facing north and east, overlooking the city. Ordinarily, the space was used as a patient-lounge area, but overflow needs meant that they required the space for care. Unfortunately, though I was the lucky recipient of that space, I had to share part of it with another patient. A light curtain separated me from the woman in the next bed. (This seemed rather strange to me, but in the end I was able to get to know her and pray for her serious medical situation.)  It turned out that this would be my home for the next 10 days. My lot was to have my situation monitored while I waited for an air ambulance transfer to Vancouver.

What made my hospital stay in Prince George such an ordeal was the daily test-routine, the lack of personal privacy, the stricter less-appetizing diet, the perpetual unknowns (even about when I would be treated), and the length of time to receive treatment. The blessings, however, when I took time to count them, were even more numerous: the fact that such care was available to me, the expertise of the medical staff, the opportunity to step back from my normal routine to truly reflect and pray, the chance to “catch-up” on some book editing, and of course, the attention from so many (including my family) who either called, came to visit, or corresponded with me by text and e-mail, etc. It’s always interesting to see how we are inclined to handle the inevitable uncontrollable circumstances that emerge in our daily lives. At first, in our frustration, we tend to remonstrate with various expressions of grief — disappointment, anger, impatience, depression, self-doubt, and prayer for release, before settling into a certain degree of resignation.

After ten days of waiting, I was finally transferred to St. Paul’s hospital in Vancouver. But there too, I was compelled to wait for several days before the angiogram happened. Once again, I have to admit, I was bit miffed by the length of time it took for me to receive treatment. On a human and organizational level, I found it easy to consider all kinds of reasons why the system wasn’t working for me like it should. I concluded, legitimately I think, that our Canadian system of health care doesn’t accommodate very well, anyone who doesn’t have an immediate, critical need for medical attention. It seems that the system is seriously administratively and financially inefficient in caring for the regular needs of the citizenry. Even though everyone contributes substantially through the tax system, not everyone actually receives equal treatment. But that’s a whole other subject — yet worthy of important consideration in this discussion!

As it was, I did eventually receive the treatment for which I was prepared by the emergency medical staff back in Prince George. It happened on the Friday, exactly two weeks after I had first experienced the chest pain. On the morning of the day I received the angiogram, I was challenged to trust God for His healing touch in my body. This came by way of a wonderful ministry of encouragement in biblical meditation that I receive weekly by e-mail from a friend who has given his life to this kind of service. It is called Space for God, and is available for the asking through the Pacific District of the Christian and Missionary Alliance in Canada. The particular edition that morning focused on God’s provision for our physical healing when it is also accompanied by our practical sanctification. Besides the Scriptures shared, I was especially struck by this sentence from the writings of Andrew Murray: “The more we allow ourselves to personally experience sanctification by faith, the more we also experience healing by faith. These two doctrines walk together.” Additionally, that morning, I was reading Psalm 102 in my regular personal worship time, which also included a prayer for God’s help in a time of physical need. This was my disposition as I prepared for the inevitable angiogram.

The angiogram treatment itself was rather uneventful. But when it was all over, the doctor in charge of the exercise, Dr. Boone, came by to say they hadn’t found any obstruction whatsoever in the arteries and veins of my heart. In fact, he went back to check a second time, but concluded that everything was clear. And the photo image of the X-ray treatment which they left with me, confirmed what he announced. THAT WAS A VERY SPECIAL MOMENT OF PRAISE AND THANKSGIVING TO THE LORD FOR ME. The doctor didn’t know the reason for my chest pain, but all signs that it may have been caused by a blocked artery had disappeared. The alternative explanations are that my pain was misdiagnosed or that the Lord did indeed heal my heart of any blockages.

My two-week hospital stay provided me with many blessings including some good time for reflection and prayer, some great opportunities to share about the blessing of faith in Christ, some great visits and conversations with friends and family, and the opportunity to complete edits on my recently published book. But, best of all, it gave me the opportunity to see God at work in very practical ways in my life which also included an experience of God’s personal touch. I don’t know the cause of the pain in my chest, but like the blind man who was healed in John 9, I am able to say, “one thing I do know. I was blind but now I see (John 9:25). In my case, “I had chest pain, and now I don’t.”