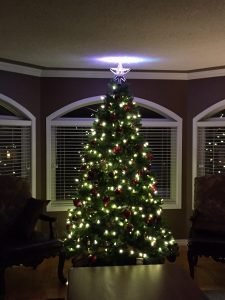 A brightly decorated evergreen is iconic at Christmastime. It is said to have originated in Germany in the 16th Century when Christians transformed a pagan practice into Christian meaning. Today it speaks of perpetual life in the midst of our dark world that ultimately points us to the Christ who was born in Bethlehem.

The deepest theological meaning of the Christmas story presented to us in the Holy Scriptures is that the second person of the triune God, the eternal Christ, came to earth taking on the likeness of humankind in order to become an acceptable atoning sacrifice for its sin.

According to Matthew’s Gospel (1:23), Jesus’ birth fulfilled an Old Testament prophecy (Isaiah 7:14) that He would be called, “Immanuel — which means, ‘God with us.” John’s Gospel (1:14) says, “The Word became flesh and made his dwelling among us… ” This statement effectively captures the idea of “incarnation” which means “becoming flesh.” In Paul’s letter to the Philippians, he refers to Jesus, “being in very nature God,” but that in coming to earth, He “made himself nothing, taking the very nature of a servant, being made in human likeness” (2:6, 7). Further (2 Corinthians 5:21), Paul writes, “God made him who had no sin to be sin for us, so that in him we might become the righteousness of God.”

In writing about postmodernism in the book, Thoughtful Adaptations to Change: Authentic Christian Faith in Postmodern Times, I try to explain the difference between modernism and postmodernism. I note that modernism (which predominated during the 17th to 20th centuries) was characterized by reason, logical thought, and the scientific method. While there were many blessings that came to the western world by this means including the value of education, medicine and industry, a parallel development was an attitude of human hubris or pride. Though there were many exceptions to this general rule, in many ways this period was often marked by an air of superiority to those who didn’t appear to have the same knowledge or understanding.

Postmodernism, which has become mainstream western philosophy in the last fifty years, developed as a reaction to the authoritarian attitude of modernism. Postmoderns largely reject the idea of a rational explanation for life on planet earth. In their view, no one really knows about human origin or destiny. We can only know what is true in personal experience.

Of course, this extreme reaction to modern values has produced its own difficulties — the view that there is no such thing as objective truth or a universal explanation of the nature of life. In the postmodern way of thinking, each person must find their own reason for existence. This means that one’s personal experience is really the only valid “truth.” Rational ways of thinking have been replaced by what one personally “feels.” Emotion has become the new “rational.”

From a Christian perspective, this shift to postmodernism is not all negative. Though Christians believe in the huge significance of objective truth as revealed from God through the Bible and in Jesus Christ, they acknowledge that emotional connection is also very important.

The relevance of all of this to the incarnation of Jesus Christ is absolutely profound! Postmodernism stresses that we need to pay attention to what people feel. It means that we need to truly care for people before there is any value in trying to change someone’ mind about what they believe. We now have come to recognize that people don’t care how much you know until they know how much you care. As Jesus Christ entered into our lives through His incarnation, so we must be willing to enter into the lives of friends and neighbours before we can try to communicate effectively about objective truth.

At the same time, we must always remember that Gospel isn’t only about emotional care. Love isn’t really love unless it is also combined with the communication of what is objectively true (including the Good news of Jesus) in terms of words which can be rationally understood. As Jesus showed us in coming to live among us in a human body on this earth, incarnational living means humbling ourselves to identify fully with people in the deepest needs of their lives for God’s sake, and His saving grace.

So this Christmas consider how it’s possible, through faith in Christ, to live incarnationally.