The Legacy of a Great Evangelist 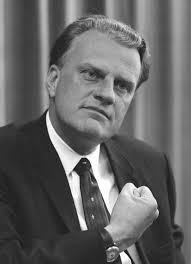 There have been many posts concerning the legacy of Billy Graham since his passing on Wednesday, February 21, at the age of 99. One of my favourite tributes is the very free and bold testimony of Kathy Lee Gifford who spoke of her friendship with Billy Graham on the Megyn Kelly Today show. Gifford took the opportunity to speak about the main focus of Billy Graham’s ministry which was the Good News of Jesus.

Those of us who grew up in the heyday of Billy Graham’s ministry can’t help but be deeply moved by the large swath cut by his ministry for the sake of God’s kingdom. Quite miraculously, he became a cultural icon especially in the United States of America. Evangelicalism in the US has become such a large part of its culture because of the leadership and influence of Billy Graham. And Canada couldn’t help but be positively affected by that influence as well.

Billy Graham’s phenomenal impact is due to many factors including his unique spiritual gifting and calling. But another factor was that America and the world was ready for his kind of ministry due to the lingering effect of the Second World War. Graham’s message brought a sense of hope in the midst of human despair. All over the world people flocked to large stadiums to listen to the beautiful music of the large inter-denominational church choirs led by Cliff Barrows. Additionally, they were enraptured by the rich bass-baritone voice of Canadian-born, George Beverly Shea. But the main feature of these events was the powerful Bible preaching of Billy Graham.

I don’t have a lot to add to the many tributes that have been given about him on the occasion of his passing except to hi-light  the essence of the message he preached — the simple gospel. It’s been noted that Billy Graham was not an intellectual man or an academic scholar. Though well-versed in the Scriptures and theology, his riveting appeal was to the ordinary person concerning God’s love made known to all of us in Christ. His message was every person’s opportunity to experience God’s salvation in Christ through faith in Jesus’ atoning sacrifice for sin and His resurrection. Dr. Graham emphasized the importance of a personal faith response by a call for decision at the end of each message.

Billy Graham’s passing gives us the opportunity to reflect on a life well-lived and invested for God’s glory. But it also gives us an occasion to think about the power there is in the simple proclamation of the gospel. It’s a reminder of what’s the most important consideration is in all of our lives — that God loves the world so much (John 3:16), that He sent His Son into the world, not to condemn it but to save it (John 3:17), and that He did this by arranging for Jesus’ sacrificial death on the cross (Romans 3:25). This is the righteousness of God which people can receive and by which they can be saved for eternity from the condemnation of sin. (John 1:12). It is by confessing faith in Christ that people can have assurance that their sins really are forgiven and that they are genuinely saved (Romans 10:9, 10).

Reflecting on Billy Graham’s life and ministry is “cause for pause” to consider whether we have come to believe as he preached. But it also is an opportunity to consider whether the church of today is in danger of losing a focus on this simple message of the gospel. If there is one thing that the life of Billy Graham represents it is the proclamation of this message. Evidently, through Billy Graham’s preaching more than 20 million people confessed faith in Christ. I think this fact should serve to remind us anew of the profound nature of a gospel focus in church ministry.

It’s very evident that Billy Graham’s work was a sovereign and supernatural work of God that touched the whole world profoundly in the middle of the twentieth century. Many of us are asking how it might be that this could happen again. Who will be the next Billy Graham to speak to the masses in such an authoritative and powerful way? Though we live in very different times, there is no doubt that God could do it again. But it will take the prayers of God’s people built upon an earnest desire among them to see this kind of spiritual awakening and ministry. May it be so, we pray.