Living in the Glory 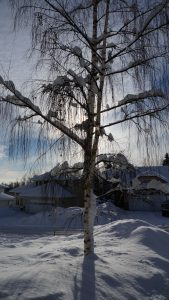 Recently, I had occasion to spend some time thinking about the transfiguration of Jesus as described in the first 13 verses of Matthew 17. Similar accounts of this unusual experience are found in Mark 9:2-13 and Luke 9:26-36. The slight variation in these “synoptic” accounts helps to confirm the validity of the report. Also, there are some parallels in this story with Moses ascent on Mount Sinai 1500 years earlier to receive the Law in the Ten Commandments from the mouth of the Lord.

In the Gospels’ story of Jesus’ transfiguration, there are several important features. The first is that Jesus takes His three closest disciples up on a high mountain — Peter, James, and John. Though tradition has identified the place of the Transfiguration as Mount Tabor, this location was unlikely since it wasn’t that high and at the time, evidently, there was a small village on that mountain. More likely the Transfiguration occurred on a mountain just west of Tiberius on the Sea of Galilee.

The second most outstanding feature of the Gospel stories is that while the four are up there (Luke says it was during Jesus’ prayer), His body, including His clothing, was suddenly transformed into glorious light. The third element in the experience was that two iconic figures of the Old Testament, Moses and Elijah, suddenly appeared and entered into conversation with Jesus. The fourth factor was Peter’s suggestion to build a shelter or tent for each of the three heavenly figures. The fifth piece in this experience was God’s voice saying, This is my beloved Son: Listen to Him. And the last part of the event was Jesus’ touch and ministry to the three after they were overwhelmed by fear in this experience. Returning to His earthly form, He told them not to be afraid, and not to tell anyone what they had seen until after his death and resurrection.

What are we to make of this event in the lives of the three disciples and what is its relevance to our lives today? Well, for one thing, it is a glimpse for us, as it was for those disciples, of Jesus’ heavenly body. In that short event, Jesus appeared in all of His glory to the disciples.

Ordinarily, we use the word “glory” in in our world to refer to great human accomplishment like winning an important competition, having an exhilarating sensational experience, or suddenly achieving fame or fortune. We’re not used to thinking in terms of God’s glory. Instead, we tend to be taken up with elements of our own glory or the world’s glory.

In this story the glory of God is visible in Jesus’ transformed body. It speaks, if ever so briefly, of Jesus’ heavenly existence and of the glory He left behind when He came to this earth. It reminds us of the glory of God that the children of Israel saw from afar on the mountain in Exodus 19, or of Moses’ and Joshua’s experience on that mountain when they went up into the presence of the Lord (Exodus 24). That was the glory that filled the tabernacle after its construction as well as the temple after its completion in Solomon’s time. And this is the glory that we associate with the reality of heaven.

The second expression of God’s glory in this story is the voice that was heard glorifying Christ as the Father’s beloved Son, and calling Jesus’ disciples to listen to Him. This experience reminds us of the glory of God’s Word as it exists in its written from today. And the third expression of God’s glory in this story is His abiding presence with the disciples after this experience — how He touched them after they were overwhelmed with fear and how He gave them instructions to refrain from speaking of this experience until after His death and resurrection. (Evidently, He didn’t want this revelation to distract from the necessity of His death and resurrection, soon to take place.)

One of the sad things about our daily lives is that we fail to see the glory of God. In the words of Romans 3:23, we have all sinned and fallen short of God’s glory. This was the big loss for Adam and Even and their descendants because of their disobedience in the Garden of Eden. And so we go about our lives with a sense of want for the glory of God, looking for it in all the wrong places and by all the wrong means. We want to experience God’s glory on our own terms and in our ow way. We tend to want to exchange the glory of God for our own human glory.

Yet, because of Jesus’ death and resurrection for our sins, we may once again experience the glory of God — not only in the life to come, but even while we are living here on earth. It is a matter of perspective. Instead of being overwhelmed by worry and human disappointment, we can see God not only in the beauty of the natural world that surrounds us but also in the wonder of His grace and mercy in our sufferings. As Paul puts in 2 Corinthians 3:18, as we see the glory of God in Christ, we are changed into the same image from one degree of glory to another by the Spirit of the Lord.

This glorious experience in everyday life is what Albert Simpson, founder of the Christian and Missionary Alliance, wrote about in the Hymn, Living in the Glory: