Looking Up at the Cross this Easter 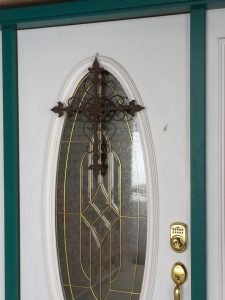 Surely, it’s an understatement to say that the cross has new meaning this Easter. In the midst of the world’s suffering from the Coronavirus, rather providentially I think, we are able to see the beauty of Easter in a whole new light.

The empty cross has been a symbol of the Christian faith since the time of Constantine in the 4th century. It highlights the truth that Jesus’ death and resurrection stands at the very center of human history and redemption. Through Christ’s sacrifice believers are promised forgiveness of sins, victory over death, and a living relationship with God forever!

In our season of sorrow this Easter, like many others, we too have placed an empty cross on the door of our home. Partly, we did this because it emulates the idea found in Numbers 21:4-9 where we read of the bronze snake on a pole constructed by Moses to provide a means of healing from a plague that fell upon the Israelites while they lived in the wilderness. Because of their complaint against God for bringing them into the desert, God disciplined them by sending venomous snakes among them having power to inflict death. Evidently, many actually died. Recognizing their sin because of the snakes, the people cried out for God’s mercy. God heard their plea and provided for their healing if they were willing, simply to look up at the snake on the pole. 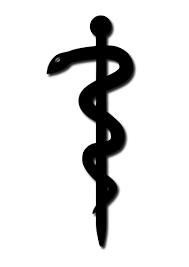 snake in the desert, so the Son of Man must be lifted up, that everyone who believes in him may have eternal life. By this it is evident that Moses’ construction of the pole with the bronze snake was a prophetic picture of the true meaning of Jesus’ death on the cross. It’s not surprising that the snake on a pole has become a universal symbol of medicinal healing. Though popularly attributed to the Greek mythological medicine god, Asclepius, the symbol ultimately reflects the meaning of the ancient biblical text.

But how is it that Jesus’ death on the cross fulfills this strange picture of healing in the desert? Actually, the snake represents the temptation and sin of Adam and Eve in the Garden of Eden that caused them to fall out of fellowship with God. At that time, God cursed the snake, adding that the offspring of the woman (the Messiah) would ultimately crush its head (Genesis 3:14 and 15). Much later, Paul wrote these words in Galatians 3:13: Christ redeemed us from the curse of the law by becoming a curse for us, for it is written, “Cursed is everyone who is hung on a tree.”  In this way, Jesus identified with the cursed snake that was put on the pole in Moses’ day. As 2 Corinthians 5:21 puts it, God made him who had no sin to be sin for us, so that in him we might become the righteousness of God. And that, in a simple sentence, along with Jesus’ resurrection, is what the celebration of Easter is really all about!

Just as the plague of the snake-bites in Moses’ day led to death, so it is that our disobedience to God’s law (i.e. sin) also ultimately leads to death (see Romans 5:12). But just as those who looked to the snake on the pole in Moses’ time were healed, so it is that those who look to Jesus on the cross, who hung there for our sin, may also be healed — especially spiritually, but also physically. It is in looking to Jesus on the cross as our Saviour from sin, putting our faith and trust in him, that we are granted soul-healing forever. This is the primary message of the New Testament scriptures, summed up so well in John 3:16: For God so loved the world that he gave his only Son, that whoever believes in him should not perish but have eternal life.

But also, in the midst of illness caused by any kind of plague, we may look to Jesus for physical healing too, because his death on the cross removed the curse of sin including its physical effects. In Isaiah 53:4 and 5, the prophet foretold that Jesus’ sacrifice would bring forgiveness as well as healing. Surely he took up our infirmities and carried our sorrows,… But he was pierced for our transgressions, he was crushed for our iniquities; the punishment that brought us peace was upon him, and by his wounds we are healed. And in the first Gospel (8:17), Matthew writes that Jesus healed the sick in his day in fulfillment of this very prophecy of Isaiah.

We put a cross on the front door of our home in the midst of the Coronavirus this Easter, not because we think the cross itself will keep us from getting sick and possibly dying, but because it symbolizes our faith in Jesus Christ as the one who suffered for our sins and gave us eternal life. But since the cross also speaks of Jesus’ continuing presence and protection from the effects of sin which also includes illness, we hung the cross there because it speaks of physical protection in Christ as well.

Of course, we know that God may sometimes use illness as a means of refinement in our spiritual lives. (The Bible has examples of people who suffered for that reason.) So we don’t take it for granted that, because we are believers in Christ, we will not be affected by the virus. We use common-sense precautions. But we also experience a genuine sense of freedom from fear of infection during this time because of Christ’s victory over sin and its effects.

We also chose to hang the cross on our door this Easter to remind those who pass by of the true meaning of Easter and our celebration of Jesus’ death and resurrection. As a testimony to the truth of Jesus’ sacrifice and victory, we display the empty cross because we want to encourage others to believe this great news as well.

We have all seen that one of the outstanding features of this pandemic is the extreme effort made by governments and medical personnel to contain the virus and prevent large-scale death. And, no doubt, we are deeply grateful for all who serve in this way and for the application of these natural remedies in this time. But I can’t help but think that God longs for everyone to remember a time when his people in the desert looked to a snake on a pole to experience healing from a deadly plague. And in our time of pestilence, I’m sure God yearns for everyone to similarly look upon his Son who hung on the cross some 2000 years ago to forgive our sins and heal our diseases. Not surprisingly, I have heard of some in this time, who have experienced miraculous healing from the Coronavirus, by their prayer for healing.

In this Holy Week, while the world is reminded of Jesus’ suffering for our sins, climaxed in his glorious resurrection, may many be directed to look up to him for their spiritual and physical healing. And may we who believe look for opportunities to lead others to put their trust in Jesus for their eternal life and their present-day safety.