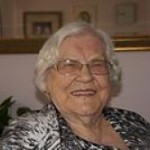 It is not likely you will find the name of Phyllis Drewlo on Google or in any kind of Who’s Who registry.  She was not known very widely.  Yet I can’t help but sense she had a very large influence for good in the lives of many people.  This is due in part to the people she touched directly but even more through the lives of her four sons whom she committed herself to raise with all the help that God could possibly give her.  On Tuesday, September 13, at the age of 94 1/2 God opened a door for her in heaven through which she entered.  On Saturday, September 24th family and friends gathered to remember the beauty of her life and influence.  It was a very special moment of thanksgiving and praise to God for the glory of His grace in her life.

Mother was the third of six children (one of whom died while she was still a child), the product of German/Russian immigrants who came to central Manitoba about 1912 to escape the troubles of a ruthless government at the time.  Phyllis was born to Rudolph and Justine Gutknecht on April 10, 1917 near Ashern, Manitoba where she grew up alongside her older brothers and younger sisters on a homesteading farm.  Her character and values were shaped by the challenges of living on the Canadain prairies in those times but also by her deep personal response early in life to the Good News concerning Jesus.   She would often speak of a couple of emmisaries from Camper, Manitoba — Mr. Kuhlman and Mr. Shultheise — who came to their farm to share the Good News with them.  Though schooled in the Protestant religion of Martin Luther, she had never actually known how to have a personal relationship with God through faith in Jesus Christ until these gentlemen came along to share the Gospel with her family.

After she married William Drewlo in 1942, a farm-hand from the near-by community of New Home (and his similar response to the Good News) they served the Lord through a small Mennonite Mission church, pastored by Rev. Joe Wiebe, in the Marne area near Ashern.  They were greatly helped through the Wiebe family in those years in practical farm living, in their spiritual lives, and in raising their four boys.  In 1958, through the adventurous and entrepreneurial spirit of Phyllis, the family moved to Chilliwack and later Vancouver where William got a job at a lumber manufacturing mill.  In these places the family was introduced to the fellowship and unique ministry of the Christian and Missionary Alliance attending (in Vancouver) what was then known as the Tenth Avenue Alliance Church.

Besides her spiritual devotion, the hall-mark of Phyllis’ life was her very practical and generous hospitality toward her family and extended family.  She worked hard to supplement the family income through domestic work in Vancouver’s west side and also through her tight management of a modest apartment in Burnaby.  In addition to ensuring she had enough for her own family she wanted to provide for the hospitality of her extended family and friends, as well as for the needs of many Christian ministries that she learned about through the church and other media.  Mother was a morning person.  She would rise early each day because she loved the quietness of that time and the opportunity to get a jump on things.  She would sing a little ditty: Early to bed and early to rise, makes a man healthy and wealthy and wise.

Mom had many other unusual expressions that, rooted in her German-speaking culture, summed up much about her.  She had a strong sense of accountability for life.  She would say, time and tide waits for no man, or be sure your sin will find you out, or, we’re living in the last days. With her family members (children and grand-children especially) mother was known for her tendency to call people to account.  She would ask if they had been in church on Sunday and what they were doing for eternity.  Thinking of everyone’s need (in the family) to actually respond to the Gospel, she would often say, may the circle be unbroken. She had a strong desire to see everyone included in heaven and its salvation.  For the same reasons she would often encourage her family members to call on each other and to keep in touch.

Keeping in touch was something that Mother did, not only with the members of her own family, but with her extended family and with a lot of other people whom she got to know over the years.  She would spend hours on the phone just trying to maintain relationship with people.  People so appreciated her personal interest in them.  And each call included some encouragement to trust the Lord.

If mother had a fault or two it was that sometimes she could be a bit tactless and even judgmental — about the way people groomed themselves, how they dressed, the things they did — which she might feel were not always in keeping with the Bible, or true Christian faith.  She was quick to offer correction but she did it in a way that made people realize how much she really cared for them.  She acknowledged her own weaknesses and failures offering that, in her own life, there was always room for improvement. In the end she knew she was accepted by God on the basis of her faith in what He had done for her through Jesus Christ — not on the basis of merit.

Mother believed, I think, that cleanliness was next to godliness. And though she wasn’t one to worry about having her children keep up with the latest fashion, she always made sure they had clean clothes and plenty to eat.  She was frugal and entrepreneurial often trying to make a buck or two by finding saleable items at garage sales which she could offer at one of her own many garage sales.  And mother left this other legacy for her children — that she deeply loved their father, her husband.  Having predeceased her by six years, she often said how much she missed him and what a good man he was! Though her personality dominated his she always deferred to his honour and leadership in our home.

My brothers and I (and our families) are saddened by her loss for she left such a deep imprint of goodness and practical education upon our lives.  But we are encouraged by the memory of the heritage that she left for us — especially in the simplicity and genuineness of the faith that meant so much to her, and that has come to mean so much to us.  Phyllis Drewlo didn’t have a lot of formal education but she used the natural gifts God gave her to make a big mark for Him in the lives of her family members and quite a number of others.

Then I heard a voice from heaven say, “Write: Blessed are the dead who die in the Lord form now on.”  “Yes,” says the Spirit, “they will rest from their labour, for their deeds will follow them” (Revelation 14:13).