On Equality and Difference 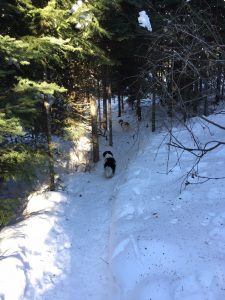 I think today was one of the last crispy cold Sundays of this winter season — somewhere around 10 below Celsius this afternoon. I took the opportunity to get some dog-walking exercise in the snowy woods called, Forests for the World, about a kilometer from our house. Our two, 2-year old dogs, of course were only too eager to join in the fun. They love to explore every little trail and play a game of catch-up with me when I pretend to take one trail, and then suddenly back-track after they have run much further. When they discover I have “changed my mind,” they coming scurrying back as quickly as possible, a ball of fur as they bound past me.

Let me tell you about our dogs. They are brothers, King Charles / Japanese (Chin) Spaniel cross. I believe their mother was King Charles and their father, Chin. What amazes me about these “boys” is that though they are both lovable in their own separate ways, they are very different!  Tucker, the brown and white one, is a bit smaller than the other. We purchased him as an after-thought expecting him to be less attractive. But, in fact, he has become the most attractive to our grand-children (and really also, to us). His personality is such that he is an eager-beaver about everything — always enthusiastic and definitely the leader of the two — such an inspiration. That is, until he meets a bigger dog. When that happens, he wines and yelps, wanting desperately to be rescued!

Georgie, the tri-colour (though mostly black and white but with some brown on his nose and hind leg), is a wee bit bigger but much more reserved and timid. He is more King Charles Cavalier, like his mother — also with thicker, bushier hair. Unlike his brother, Georgie doesn’t cry when he sees a bigger dog. Instead, consistent with his timidity, he curls up into a little ball. He’s also a bit more of a “foodie” than his brother. Tucker is more intelligent, quicker to catch on to things like fetching. He’s more playful. Both are affectionate but in some ways, Georgie actually seems a bit more so. Both are similar in so many ways, but different. They love each other dearly and tend to complain when they are separated for any significant length of time.

Of course we love both of “the boys” dearly because they are so interesting. For one thing, they are a kind of nature parable to us of similarity and difference. Though they are both dogs in every sense they each demonstrate very unique personalities. And it seems to me that this has a great deal of application to life in general and actually fits with a Christian perspective as well.

One of the characteristics of these postmodern times, I believe, is what I would call an unqualified emphasis on equality. Discrimination (and its sister, intolerance) appears to have become one of the most sensitive issues of our times. These days it is almost impossible to speak freely about real differences among us regarding intelligence, religion, race, education, gender, as well as morality and ethics — all in the name of equality. As I have written about this in my book, Thoughtful Adaptations to Change — Authentic Christian Faith in Postmodern Times, like so many other things, I think, this attitude seems a characteristic of the very real shift that has recently taken place, from modernism to postmodernism. As I explain in the book, though there are good ways by this shift in which the extremes of modernism have been attractively mitigated, I wonder whether we have not, to our own hurt, swung to the other extreme.

When I read Scripture, I see quite clearly that though God is love, He is also appears quite discriminating in the way He applies His love. For example, in reading Genesis, I can’t help but see how He discriminates between Abraham and his countrymen (not to mention his nephew Lot), between Isaac and Ishmael, and between Jacob and Esau. And there are times when Jesus appears to reflect this same kind of discrimination in His own ministry. In fact, in Matthew 20 he tells a rather graphic story about a landowner (ultimately identified as God) who hires workers for his vineyard at different times of the day only to pay them all the same amount at the end of the day. When the workers complain about this obvious inequality, the landowner justifies his actions by saying he paid each of them exactly what he had promised. He says, “Don’t I have a right to do what I choose with what belongs to me? Are you complaining because I am generous?”

Through all of this, I’ve come to the conclusion that there is often a legitimate sense of difference among us that we ought to willingly acknowledge. Though God cares equally about all human beings because they are created in His image (Genesis) and because Christ died for the sin of the whole world (John 3:16), it’s evident that not everyone has been equally endowed or ends up being equally rewarded. And while it is clear that everyone will be judged equally by God’s moral law, people will be rewarded or condemned according to what they have done with what they have been given (different for each person — according to Matthew 25:14-30).

I know all of this is somewhat of a mystery, but clearly, God has apportioned different gifts and assignments to different people according to His own will. Rather than being jealous of another’s life assignment, we should strive to be all that God has called us to be according to what He has made us and where He has placed us. We should be able to talk freely about legitimate differences in ability, religion, ethics, politics, gender, nationality, education and economy, (etc.) without, at the same time, making any feel that they are less important than another.  Is that not why the apostles, for example, speak of differences of roles for church elders and deacons, for men and women, for children and parents, for slaves and owners, and for the various types of service based on the gifts of the Spirit?

While it is undoubtedly true that there have been many abuses of difference it seems to me that the solution lies, not in ignoring such diversity, but in celebrating it within God’s greater plan of unity through the Gospel. Why not rather open our hearts to all that God intends in the legitimate holy calling (status) He has assigned?