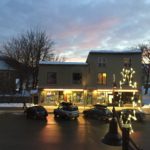 It is springtime and I am in living in Rossland, BC this week.  I am living here because of some transition work with the Trail Alliance Church about 12 kilometres east and a couple thousand feet lower.   The project is nearing completion because a new pastor has been found and will be starting in his role as lead pastor at the beginning of July.  Until then, I have some days each month to speak to the church and to help them with various organizational matters.  Rossland is where I live when I am here.

Today, late in the afternoon, I took another spring walk in the sunshine and fresh air.  I live in an apartment above a business on main street (Columbia Avenue).  It is fascinating to look down below to see all of the community activity on that street.  Just across the way, a new business has opened in an old building.  It happens that the owner, who has lived here for awhile and had the business in another location, has started to come to the church where I serve.  The business is a book store and coffee shop.  It just opened this week, and because I was its first customer, the owner treated me to a free cup of coffee.  We chatted about life and the new venture.  Today, as I watched from my window, there was a steady stream of people coming and going from that business.  I wish him well.

As I walked about Rossland today (and sometimes on other days too), I couldn’t help but be impressed by the unique nature of this community.  It is an old mining town that has since developed into a first class resort community because of the skiing opportunity on nearby Red Mountain.  Rossland was  a thriving mining community over a hundred years ago.  Some of the buildings on the main street are heritage sites.  Though all of them have been refurbished the original design and architecture is still evident.

Rossland literally exists on the side of a mountain because it was there that mining operations first began.  I’m told that there are miles and miles of tunnels in the depths below the town site.  But the mountain has valleys within and around it as well, so that the houses are all built on different levels and angles to one another.  I imagine it to be similar to a village in the Swiss Alps.  Streets are narrow and steep and often go in various directions from the normal rectangular configuration.  Like the community itself and the people, the houses too are rather eclectic.  Except in some of the newer areas, no two are exactly the same.  Because of the elevation differences, entrances to homes often are at a much higher or lower level in relation to the street depending on the placement of the house.

Many people have lived here all their lives.  Today, as I walked along a street near the edge of the town, a man was just coming out of his home and joined me as he made his way to his sister’s home for supper just around the corner.  Briefly, we engaged in conversation and he told me that he lived here all his life.  When he graduated from high school he got a good paying job at the nearby metal smelting plant in Trail and never left.  It’s worked well for him because it paid well and gave him a good balance between work and play.  Recently he’s enjoyed coaching his sons in hockey.

Many of the people who live in Rossland today are here either because they’ve grown up here, or because they’ve moved here to enjoy the abundant recreational opportunities while working in some professional capacity in Trail  down by the Columbia River.  So the town is a mix of old time residents and young people.  Many are professionals.   On the street below I can see, from where I live, that most of the people who come and go are people who are engaged in the recreational attractions of the community.  At this time of year, there are all sorts of mountain bikes everywhere.  In the winter, it’s skis and snowboards.

In the middle of the town, just up the hill from main street stands a large white church with a big red metal roof.  Because it’s perched on a fairly steep grade, there are lots of stairs leading up to the entrance of the building.  No doubt the building has been there for years.  It is St. Andrews United Church.   Besides the fact that the building is old and probably in need of repair the congregation is rather small and dwindling — according to the locals.  I guess there also used to be a Plymouth Brethren Assembly here as well.  But it’s been gone a long time too.

For all its beauty, it seems that Rossland is a bit of a spiritual dessert.  Considering that there are some 3500 people living in Rossland, it’s surprising that there isn’t more Christian spiritual activity happening here.  I suppose it’s because people are mostly focused on enjoying the region otherwise.  Compared to what things looked like one hundred years ago (according to the pictures), it is evident that the community has been blessed in many ways.  The community has most of the businesses and services that anyone could want within easy proximity of home.   It is quaint and beautiful.  There is definitely a sense of community here.

But it is evident that there is also a sense of spiritual poverty.  Amidst the obvious interest in non-Christian, New Age kinds of spirituality, there is a spiritual darkness that pervades this place.  Though I know of some Christians who live here, it seems the light of the glorious Gospel of Christ has grown rather faint in this town.

There is no doubt that Rossland represents a significant spiritual challenge to a strong Christian ministry.  But I’m also sure it offers a great opportunity for the work of the Gospel.  For one thing, there is the lack of Christian ministry of which I have spoken.  For another, the town is alive with young people from many different places in the world.  Something needs to be done within the community to ignite a spiritual revival.

However that happens, it will begin by a few Christians having a vision for the community’s spiritual need and meeting for prayer.  Perhaps Trail Alliance Church could extend its ministry here through a Saturday night event of one kind or another.  It needn’t be large to start — just a few people meeting together regularly to pray and worship, developing ideas of how to bring the Gospel here.  My prayers for this community are to this end.  May God send a biblical spiritual revival to this place — for His glory and the blessing of the people who live here.