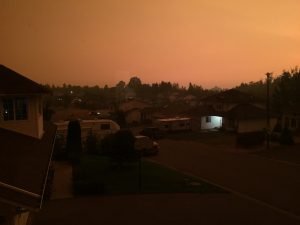 It was much darker than this picture suggests, but this was the scene looking east on our street at approximately 9:30 on the morning of Friday, August 10th of this year. The ordinarily summer morning sun was hidden by a thick cloud of smoke over the entire region that made for an eerie, apocalyptic kind of atmosphere.

Some said it reminded them of the reference in Revelation 9 which tells of the effect when the fifth angel sounded the trumpet which caused a star to fall from the sky to the earth. In that event, the star was given the key to the Abyss, and when the Abyss was opened it emitted a thick cloud of smoke that darkened the sun and the sky. The judgement prophesied there includes much more but this event in our part of the world at this time couldn’t help but bring that image to mind — or the one of the daylight suddenly ceasing in mid-day at the time of Jesus’ death on the cross (Luke 23:44).

In our case, the darkness of the morning of course, was due to the smoke produced by fires burning forest land, not only near Prince George where we live, but all over our province of British Columbia. At one point there were more than 600 fires burning all over the province. As last year, it was a national emergency that called forth military help and equipment from the federal government to deal with the crisis. Though not as severe as last summer in terms of the impact on human life, many were compelled to vacate their homes and seek shelter elsewhere until the danger was past. Though all of us in British Columbia and beyond have had to contend with a smoky atmosphere for much of the month of August, one can’t help but feel a sense of deep compassion for those who have lost property, livestock and homes. We were inconvenienced by the smoke, but many others were dealing with the raging fires up close.

In different ways, an event of this nature can’t help but prompt questions about the meaning of this disaster and others like them that affect all of our lives so much. Almost everyday we hear of human devastation caused by floods, earthquakes, tornadoes, volcanos, and fire. And these don’t take into account the impact of atrocities prompted by human violence, sexual exploitation and drug abuse.

Some say that natural disasters are caused by climate change and global warming that is entirely the result of human industry. In their view the solution is simply a matter of everyone agreeing on this cause and committing to stop all activity or industry that upsets the balance of nature. At the other extreme are those who conclude that all of these happenings are really “acts of God” in which He is bringing His judgement upon the world due to its sinful ways much as He did on Sodom and Gomorrah (Genesis 19) or in the plagues of Egypt (Exodus 7 – 11). Some discount God’s involvement completely while others think these occurrences are signs of God’s anger.

But perhaps a better explanation beyond these two extremes is that the disasters of our world are caused both by human depravity and “God’s acts.” Despite great advances in humankind’s knowledge and skills, according to the Bible, human limitation and depravity is much more pervasive than we like to think. The best stewardship of the earth’s resources is deeply affected by human greed and corruption on so many fronts. Poor management, no doubt, has a very real impact on the balance of nature. There is a true sense then that we bring disaster upon ourselves in the same way that poor planning sometimes causes a bridge or building to collapse.

On the other hand, there is no doubt that a larger Hand is also involved in the events that are taking place in our world at this time. We may have scientific explanations for changes in the weather or even the climate, but the Bible leads us to conclude that God is very much involved in everything that happens in the world, and even in our personal lives. At the end of his horrendous suffering, Job of antiquity learns that only God is really able to fashion the patterns of weather and other aspects of nature (Job 38 – 41). Again and again we are reminded that God speaks through the natural world and reminds us that He is Lord of the heavens and the earth.

The prophets of old time were sent to tell His people that the happenings in their lives were sent by God to remind them of His love and care, and of their need for HIs help. In the face of Enemy threats, He warned them to turn to Him for victory and deliverance. (i.e.2 Chronicles 20). Could it be that God allows these disasters in our lives to remind us that He is God and that we need to turn from idols of our hearts to acknowledge and to worship Him? Instead of turning to scientific and human explanations for the things that happen in or lives (as good as these may be), is there a greater need for all of us to turn our attention to Him? And will it eventually be the complete disregard for God that will finally bring the worst kind of natural devastation that the world has ever seen?