Standing Up on the Slippery Slope! 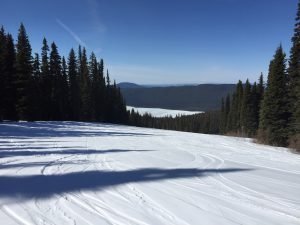 One of my pleasures during the last weekend of March this year was to do some spring skiing with members of our family at Hart Ski Hill in Prince George and then at Purden about 40 minutes west of the City. There is nothing like spring skiing for a whole variety of reasons some of the chief being the warmer air, sunshine and longer days. At the fabulous Hart Ski Hill, I had the pleasure of teaching my eight-year old grand-daughter how to ski. It was very exciting to see her gain enough confidence in two days to be able to take her to Purden for the third day. Though there were some spills and complaints about too much risk, there was so much joy when she accomplished a new challenge.

As I worked with her, I contemplated how learning to ski is a kind of parable about life for all of us. We want to accomplish something significant but we are often fearful because of the risk of serious failure. However, if we don’t try, we will never know the thrill of a new accomplishment. And, most of the time, when we do try, with God’s help we are successful and we grow just a little stronger, a little more confident, and a little bolder for the next challenge.

For some time now, I have lamented the trend toward the bold secularization of our culture in a variety of areas. What’s so disconcerting is the way it grows despite its lack of reasonableness. Yet so few are willing to stand up and challenge these trends because the voice of secular culture is so strident. But it is good to hear that there are voices, both within the Christian church and beyond, who are standing up for the right to speak truth into these things. I think of Elizabeth Johnston, who has been dubbed, “the activist mommy” because she is a an ordinary homeschooling mother of ten children who is deeply concerned about what she speaks of as “bullying” from the political left. Another example is Jordan Pedersen, the Canadian psychology professor from the University of Toronto who is speaking widely and loudly in defense of freedom of speech. I find myself identifying with these freedom fighters on a variety of subjects in which the voices of popular culture are not only out of sync with the best of scientific research, but also against the principles and values that are foundational to a civilized society.

Climate Change: In recent days our Canadian news media channels have been filled with alarming claims about the speed of climate change around the world and especially in Canada. According to some so-called meteorological authorities, climate change in Canada is happening at a rate that is more than two times faster than anywhere else in the world. That statistic is one thing, but even worse is the notion that this increase in temperature is necessarily the result of human-caused carbon emissions. My questions and doubts about these claims were confirmed recently when I listened to Richard Lindzen, the atmospheric physicist from Prager University. He makes it clear that though there is some truth that there has been an up-tick in temperature around the world in the last several decades, this is not unusual at various times in the history of our world. There is evidence for a period of global warming in the early middle ages which was followed by a mini ice-age in the latter part of that period. So the notion that these climate changes are caused entirely by human indulgences is speculative. Though it’s a biblical concept that we should seek to be good stewards of the resources at our disposal, it seems wrong to attribute all of our climate changes in the world merely to human activity. At the least, I don’t believe governments like our own have the capacity to effectively control climate change by taxing consumers on their use of fossil fuels.

Sexual Orientation: For a long time, I have known that there is not one serious scientific study that has been able to demonstrate a genetic reason for homosexual tendencies. Yet that is exactly the rational behind a movement that has been able to convince the general public that a propensity toward homosexuality is the same as the reason for one’s racial identity. Those of us who take the Bible seriously know that there is no provision in the sacred text for this sexual aberration just as there isn’t for fornication or sexual adultery. It is clear from the first couple of chapters of Genesis that God’s plan for sexual difference was for the purpose of human completeness, mutual support, and the procreation of children. In so many obvious ways, it is evident that God’s intention has always been for sexual expression to be fulfilled within the confines of a covenantal marriage relationship between a man and a woman. Jesus affirms this specific purpose for marriage in Matthew 19:4, 5. Of course, we know that such a standard is not easy for us to uphold because of the tendency for all of us to transgress against God’s plan and His law. But admitting and dealing with transgression is a lot different than somehow trying to justify our sexually immoral tendencies.

Abortion: Closely related to the previous issue is the notion that it’s okay to snuff out the lives of children who have been conceived and are developing in the womb. The popular secular culture of our times would have us believe that the human fetus is merely a natural growth in a woman’s body much like the development of any other foreign material in a person’s body. But, of course, this concept is ludicrous because the development of a fetus is always the result of the willful act of sexual engagement between a man and a woman. Granted, there are some instances in which women are impregnated against their wills through what we call rape. But there is still no reason a child so conceived deserves the death penalty through abortion simply because of the irresponsibility of adults. If the mother isn’t prepared to care for the child in such circumstances, she can choose to offer that boy or girl to someone or a couple who is desperately yearning to be a parent to some child. There is no way that we should be persuaded to believe that abortion is somehow morally neutral and okay.

Euthanasia: One of the most alarming developments of our time in our country is the idea that it’s okay for someone to commit suicide by an approved medical procedure if it becomes evident that they are struggling with their existence in some way because of physical discomfort or the loss of meaning to live. This practice stems from the idea that suffering is not desirable or a natural part of life and that there is nothing beyond the grave — that life consists merely of our physical existence. What does this say about our view of life here on earth not to mention our understanding of life after death and our accountability for life to the One who gave it to us? And what does it also say about our attitude to those who grow old and suffer, perhaps at significant expense to their children? Is it conceivable by this means that children’s aging parents might sooner or later seem to be a major inconvenience, or that there might be some more immediate benefit for children to their parents’ passing? If we consider the words of Jesus in Matthew 15:4-6 regarding the meaning of honouring one’s parents, we can imagine what He would have to say about this practice.

Evolution: Against all evidence to the contrary, it is now popular to believe that humanity came into existence over a period of millions of years through a process of natural selection and survival of the fittest — and that this all happened from a certain confluence of chemical elements in the universe without any intelligent intention otherwise! What is so alarming about this idea is how pervasive it appears to be in our educational system despite its absolutely ridiculous rationale. Once again, there is no truly satisfactory scientific explanation for such a concept even though it is presented to us again and again as pure science. While there are some geologists that consistently theorize about a very old earth, there are others who recognize that certain events might well have taken place on the earth (like the world-wide flood in the time of the biblical Noah) that could effectively explain geological phenomena of one kind or another. While there is much about the origin of the physical earth that continues to remain a mystery, there is every reason to believe that what we see in nature reflects the imprint of intelligent design.

These are but a few of the falsehoods that it appears are being promoted everywhere among us and that we are being asked to believe against all contrary evidence. It’s about time, I think, that we should have the right to challenge these existing prominent notions with free speech and a sense of objective debate. Otherwise, it seems to me, that we will continue to sink into a morass of moral decadence that will eventually destroy any sense of civility among us. “So help us, God!”