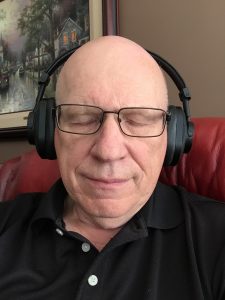 I am grateful to family members who recently gave me a set of headphones for my birthday. I now have the privilege of experiencing personal worship in a whole new way. Using Bluetooth technology, I can pair the headset with my iPhone and access sound produced by any variety of apps that I choose. This device gives a whole new meaning to what it means to have a “quiet time.” I can shut out every other normal distraction and really focus on what I’m hearing. It works really well, not only for any regular work or interest, but especially for spending time in worship.

As most Christians know, spending focused time in worship is an important aspect of what it means to be a disciple of Jesus. Years ago, I learned this vital element of the Christian faith from my association with a Christian ministry called, the Navigators. They introduced me to a tool which is known as, Seven Minutes with God. Evidently, the tool was inspired by the practice of a group of young men at Cambridge University in the late 19th Century whose diligence in study and sport eclipsed time for personal worship. They soon discovered in the midst of all their activity that the missing element of their lives was intimate personal time with God. But they also found that such a practice entailed a significant degree of discipline. One of them, named Thronton, is said to have devised a system in which a vibrating alarm clock would fall from a shelf triggering the removal of bed covers through an attached fishing line. What became an important habit for them resulted in a remarkable period of spiritual blessing on campus that eventually led a group of young men (the Cambridge Seven) to become missionaries to China.

As the little tool infers, Seven Minutes is a short time, but it isn’t long before such a practice easily expands to a half-hour or much more. The essential elements include a 1/2 minute for opening prayer, 4 minutes for reading and meditating on a passage and the 2 1/2 minutes for Prayer divided between Adoration, Confession, Thanksgiving, and Supplication (ACTS). Over time as the habit develops (certainly true in my own experience) there might be many variations of this simple approach to spending time with God.

Over the years, I have found the simple habit of beginning each day in biblical mediation and prayer to be a key element in the health of my spiritual life and ministry — both personally and professionally. Early on, I came to see that this precedent was set by great leaders throughout the history of the Jewish nation and the Christian church. One has only to think of Moses, David, or the prophets to consider the essential nature of this practice. Isaiah, for example, says, The Sovereign Lord has given me an instructed tongue, to know the word that sustains the weary. He wakens me morning by morning, wakens my ear to listen like one being taught… (Isaiah 50:4, 5). Of course, the best example of this kind of devotion is none other than Jesus himself who often resorted to some private place to spend time with his Father in prayer (i.e. Mark 1:35, Luke 6:12, Matthew 14:23). Again and again, I have found, that I am able to become centered, or to orient myself to the demands of the day, by taking time at its beginning to meditate on Scripture and to engage in prayer.

Thanks to the use of these headphones, I can now listen to the reading of Scripture, worship while listening to music, or even share in recorded prayers. I love YouVersion App because it not only offers reading opportunities in many different translations of the Bible, but also enables one to listen to the reading of those words. This approach yields a new way of meditating on Scripture. Of course, YouTube also provides many ways to assist with Worship. It isn’t long before he or she discovers that time passes very quickly by such means of worship. Another weekly devotional help has been a tool developed by Kurt Peters of the Christian and Missionary Alliance called, Space for God. It’s also a great resource to get one started, or to help one develop, what it means to have a personal worship time.

Many times, we may be inclined to question the importance of technology simply because it tends to make our lives more complicated or may even lead into temptation that ultimately brings greater trial to our lives. It’s in this spirit that the French philosopher/professor, Jacques Ellul, of the last century, wrote about the negative effect of technology on human freedom. He feared that technology could ultimately become repressive in human development — having the very opposite effect that we imagined it should have.

Ellul may have a point, but as in so many other instances of human endeavour, the problem is not with the natural world, its resources, and scientific development of many kinds. Rather, the difficulty in this kind of pursuit lies in the human tendency to make a kind of god out of such developments. Because tehcnological advance is rather exciting in its own right, it easily becomes more important than anything else and may effectivly lead to a sense of human slavery. In that way, humanity has demonstrated that it is often too smart for its own good — leading to the development of instruments of psychological, and even physical, destruction.

On the other hand, it is quite obvious that technological advance should be seen as a great blessing wherever it is employed for good purposes — as in education, medicine, industry, and yes, even in the advance of God’s great kingdom work. There are many, many illustrations of how technological advance has led to the liberation and blessing of people all over the world. And the little item mentioned in this article is just one of them.

As in so many other things, when we replace the only One who deserves our worship with something else, it becomes the thing to which we are enslaved. In another but related context, Jesus said, No servant can serve two masters. Either he will hate the one and love the other, or he will be devoted to one and despise the other. You cannot serve both God and Money (Luke 16:13). The ultimate question for all of us is whether the things we own are a means to the worship of the one true God, or the object of worship themselves. The bottom line: Let’s use God’s good gifts, wherever they are found, for His praise and glory.