The Majesty and Mystery of Marriage 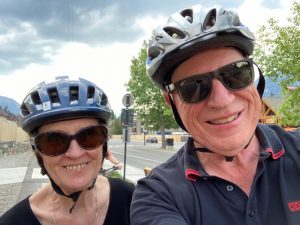 Fifty-two years ago, Carolyn and I stood before God and people, pledging our allegiance to one another (more romantically than rationally no doubt) ’til death do us part!  This week, we celebrated the occasion by riding our bikes from Canmore to Banff for a leisurely lunch and then back on what is appropriately called, the Legacy Trail. Like the ride, our marriage has been a wonderful adventure involving both “thrills and spills.” Besides celebrating our longtime friendship and love, our anniversary has been another opportunity to reflect on the meaning of marriage. Though we’ve learned much about marriage through the years, there is much about it that still holds mystery for us.

Here are some thoughts to mark the occasion:

What is it that draws a man and a woman together and leads them to spend years and years of living in a relationship of intimacy? Of course, there is the natural physical attraction that women and men have for one another which is first awakened during the emotional highs and lows of the teen years. Something, in those years, mysteriously arouses a strong sense of sexual identity and interest in its opposite. Teens typically begin to think a lot about sexual difference, attraction, and physical intimacy. Restraint, as it exists, is conditioned by an inner consciousness that a life-long relationship with one’s opposite includes many other variables.

No wonder then, that marriage is the huge social construct that it is, and that the wedding ceremony is such a defining event. In it, a man and woman enter into a witnessed agreement (a covenant) to love one another throughout their earthly lives despite all of its unknowns. In fact, at the beginning of their marriage, there is so much they don’t actually know about one another, except that they really like each other for a variety of reasons. The romance of their relationship enables them to deal constructively with the many challenges that so inevitably emerge. Even the romance of having and raising children leads to practical challenges whose resolutions require a good deal of knowledge and wisdom.

Marriage, we discover–both-subjectively and objectively–is the pursuit of intimacy in many different ways of which sexual union is its most beautiful physical expression. Though physical attraction and the desire for that kind of intimacy may be one important factor in bringing the two together, the relationship develops because of other attractive aspects of personhood–like special abilities, a sense of humour, and other quirks of personality. Women, universally it seems, for example, tend to look for various degrees of strength, stability, and sensitivity; men, on the other hand, for admiration, affection, and assistance. Ideally, a marriage thrives as the couple relate to one another in a complementary and cooperative manner, not a competitive one. It helps loads if partners share similar values, a common world-view, and unified life vision.

But the reality of marriage, romance and complementarity not withstanding, is that there are also times of dissonance and distance. No doubt, this is due to the complexities of personality as well as conditions precipitated by a biblically described fallen human nature. Not surprisingly, one of the basic requirements of a fulfilling marriage is a continual regard for one another’s well-being–not something that seems to come easily for any one of us. Because, as the Bible so summarily describes it, there is no one righteous, not even one (Romans 3:10). So, it turns out, the real reason for disharmony in marriage is due to this spiritual phenomenon.

I’m sure, a huge factor in marital longevity for us has been that we’ve individually come to terms with the spiritual dimension of our lives. Through the Bible, we’ve discovered that Christ offered forgiveness for the reality of sin by his self-sacrificing death. By that means, we believe, he opened a way for us to experience true spiritual life through faith in him. Without any sense of personal credit, I think it’s been by the gift of God’s Spirit that we’ve been able to care for one another more deeply and manage our differences more constructively. Faith, I think we’ve found, has been the key to marital satisfaction because of the spiritual foundation it provides.

But even where there is relational oneness and harmony because of common faith, we’ve found that marriage is still something that requires discipline and hard work. Attraction alone, isn’t necessarily constant, and doesn’t ensure the absence of relational stress. Even in a Christian marriage, partners must continually attend to mutual vigilance. And when attentiveness fails, and offense inevitably occurs, early initiative toward reconciliation is very important. Or, if offense isn’t immediately recognized, partners must be wiling to express their differences, amicably if possible, in an effort to find mutual understanding and togetherness. It’s one aspect of communication which is so vital in marriage.

Communication in marriage, of course, is not simply about resolving differences; it’s also about learning to hear one another’s heart-felt concerns and opinions on every matter that comes to mind. It requires active listening in which the partners in marriage really know what the other is seeking to convey. This takes time and effort. It means that marriage partners need to actually be with one another–sharing in various tasks together, enjoying fun-filled leisure time, attending to common interests and needs. But, at the same time, marriage partners need to give each other space to cultivate individual interests and pursuits. We’ve discovered that marriage is enriched when each of us yields room for each to develop their own unique aspects of personality.

No marriage, including ours, is without times when it feels like one is trying to reach out to the other from different ends of the room. Romance, no matter how strong or constant, doesn’t have the capacity to deal with perceived rational difference. This accounts in part for the mystery of marriage. Partners in marriage, it seems, never get to the place where they know each other perfectly; there is always more to discover in one another’s heart and mind. But that’s also what makes it so fascinating and attractive. Like life itself, marriage is a journey in largely unknown territory–variously featuring vistas of both mountain and valley. It truly has the capacity to inspire or depress, depending on the attention it’s given.

Though marriage is a primary universal social convention, it isn’t essential to meaningful existence. Many experience very fulfilling lives without ever being married. Many others have lost their marriage partner and must find a way to live without that person. And beyond that, we all know there are many instances of disappointment and failure in marriage–chiefly because of the common human disposition toward self-centeredness. Time and again, all have the capacity to find meaningful social relationship outside of marriage. It’s important to understand that marriage itself isn’t essential to happiness. True fulfillment in life is not about finding the right partner, but the right Power. Though marriage is part of God’s plan for human blessing and continuation, it’s not everyone’s thing. But for most of us, marriage is a door given to assist in seeking to understand the mystery of life.