The Defeat of Giants in our Times 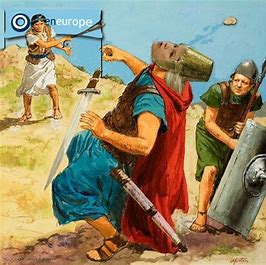 I came across a story recently, in my daily reading of the Bible, that has once again held my attention for several days. Though familiar to me from childhood, there is something about that story even now that inspires giant-like faith for the times in which we live.

It is evident in the preceding chapters that David, son of Jesse, had been anointed by the prophet Samuel, not just with the symbolic oil, but by the Spirit of the Living God for the eventual kingship of Israel. As a shepherd boy, he was successful in saving his beloved sheep from the mouth of the bear and the paw of the lion. Even at that early stage of his life, it seems he displayed wonderful gifts of courage, creativity (especially in music), and communication by the power of God’s Spirit.

But what put David’s divine anointing in public view was the simplicity of his profound victory over that giant of the Philistine nation called, Goliath. And it all started with a small errand, commissioned by his father, to visit his three oldest brothers at the front lines of the battle between Israel and the Philistines. Leaving his sheep in the care of another shepherd, he went on that short journey simply to do his father’s bidding and bless his brothers. As he set out, he knew little no doubt, about how his journey that day would result in happenings that have forever inspired God’s chosen ones especially, to slay the spiritual giants of the land who seek to defy the armies of the Living God.

For his part, the three-meter tall Philistine giant despised the young short man who came toward him with only his regular wear and a sling. And for his part, David concluded that a regular suit of armor, which the king offered, would only serve to be an encumbrance — perhaps as much to his faith as his fighting style. David’s approach in this circumstance speaks powerfully to the simplicity and freedom that is possible when God’s people proceed to fight in faith.

Though David had collected five smooth stones for the task, it only took one to find it’s target in the giant’s most vulnerable spot — the middle of his forehead. No doubt, David’s practiced skill was an important factor in the giant’s thudding collapse. But David knew that there was a lot more involved than his own skill, for he testified to the giant that “I come against you in the name of the Lord Almighty, the God of the armies of Israel, whom you have defied. This day the Lord will deliver you into my hands… ” (1 Samuel 17:45, 46). And so it was that the one who incessantly mocked the people of God fell at David’s feet. Whereupon he ran and cut off the giant’s head with his own great sword!

I know; it’s an old story of mythical proportions as far as modern culture is concerned. But for those of us who are believers in the God of the Bible, it is nothing less than a true account of what happened in the history of Israel at a critical time in its regal development. The old story of David and Goliath has become not only a cultural icon of human possibility in our own time (i.e. David and Goliath, by Malcom Gladwell), but for true followers of Christ, a huge historical example of what simple faith in Christ and the Gospel is able to accomplish against the great forces of evil in our own time.

These are days in which, it seems in greater ways than ever, evil forces of one kind or another stalk the land seeking to glorify all that is human at the expense of all that is biblically true and godly. Like the young men in Saul’s army in David’s day, it often seems that God’s people today feel overwhelmed by the taunts of the humanistic giants of our time. True Christian believers of our time are well aware of the fact that they are involved in a great spiritual and cultural battle.

To some the threats of this Enemy are truly intimidating leading them to run for idolatrous securities of one kind or another and the preoccupations of passing pleasures. But to others, who truly have the Spirit of David, these are days of opportunity to demonstrate the great victory of Christ’s cross and resurrection. The story of David and Goliath in 1 Samuel 17 is not only a true account, but a fitting symbol of what it means for disciples of Jesus to take on every God-defying giant in our times (or, in the words of St. Paul — “all that is contrary to sound doctrine,” 1 Timothy 1:10).

The lessons from this story of how these giants of our time may be defeated are many. David’s life and courage, even at that time, demonstrate the importance of God’s anointing by the Spirit of the Living God — something available to all who put their faith and trust in completely in Jesus Christ. It seems David lived those days with a sense of joy and freedom by serving with discipline and commitment. Setting aside the usual cultural preparations of his time, it appears that he took on the giant in simple faith and the skills God had given him. And it seems to me that it is that same kind of simple faith and commitment that God seeks among his people today as they hear the voices of the God-defying giants of our time.

May this simple biblical story of David and Goliath become a symbol in our times of how to respond to the taunts of those who daily defy the armies of the Living God.