The Meaning and Development of Postmodernism 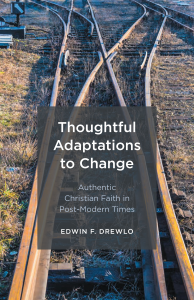 There is an important sense in which the development of philosophical thought is part of an historical continuum in which the various parts are not as distinct as we imagine or describe them to be. For example, there surely were signs of modernism’s rationalism even during what we would ordinarily think of as the pre-modern period. And certainly, this is also true of the perceived transition between modernism and postmodernism. In fact, some suggest that the postmodernism of which we speak is merely an extension of the old modernism, since it appears to have taken rationalism to a new extreme level.

Surely it must be granted that there is some overlap so that it may be proper to speak of postmodernism, as some have done, as modernity. However, I believe it’s quite possible to show that postmodernism is a more distinct development, within a broader modernity, that has come about since about the middle of the twentieth century.

In speaking of the origins of postmodern thinking, where does one begin? No doubt there are a variety of opinions based on different perspectives. It’s probably fair to say that there is no precise explanation about the origins of postmodernism, but there are a variety of influences that ultimately led to the rejection of rationalism which so obviously characterized the modern period. At the very least, it is evident from what is observed in popular culture that Western society is no longer governed by the same philosophical ideas that prevailed earlier. Something has dramatically changed, and the change is much more revolutionary than we might imagine!

It is generally acknowledged by students of philosophy that the seeds of postmodernity were sown by the philosophical thinking of people like Immanuel Kant and Frederick Nietzsche. Immanuel Kant (1724 – 1804), as mentioned earlier, believed that conceptions of reality were impositions of our own thought processes rather than the other way around (as implied in Christian thought). In other words, the structures of reality that we’d assumed were ordained by God, in his mind were simply products of human ways of thinking rather than representations of reality. In that sense, the world was actually unknowable.

Whereas Kant marked the philosophical transition from the Renaissance (the 14th to 16th century revival of Greek and Roman rational and artistic culture) to the Enlightenment (the 17th and 18th century obsession with pure reason), Frederick Nietzsche may symbolize the shift more generally from modernism to postmodernism. As the “patron saint” of postmodernist philosophy, Nietzsche held to “perspectivism,” which theorizes that all knowledge (including science) is a matter of perspective and interpretation. Nietzsche (1844 – 1900), who lived more than a hundred years after Kant, furthered the latter’s idea in the form of an emphasis on self-actualization in which people think more in terms of responsibility for their own existence and destiny. Nietzsche is “credited” with the idea that God is dead, and that God is a construct of the human mind in a way that isn’t relevant to human reality. It was Nietzsche who invented the idea of “nihilism,” or the denial of a reason for human existence, so that we should not expect to find meaning in life. These ideas also fit well with the evolutionary ideas of Charles Darwin, Nietzsche’s contemporary, who concluded that the development of life as we know it was a result of survival through self-determination.

In the mid-twentieth century, Christian philosopher Francis Schaeffer wrote extensively about the implications of this denial of rational thought in his book, Escape from Reason. In doing so, he anticipated some of the basic tenets of postmodernism, which essentially denies the modernist idea of logical thought processes. Schaeffer wrote broadly about existentialism, a term first used by the Danish Lutheran pastor Søren Kierkegaard. Existentialism emphasizes the importance of the subjective experience as the most valid expression of truth. Kierkegaard, who lived from 1813 to 1855, elevated the idea of faith and passion for its own sake. It was he who spoke in terms of “a leap of faith,” meaning that the experience of faith was more important than the object in which faith is placed, since (in his view) we cannot be sure of any objective reality. Miriam-Webster’s dictionary defines existentialism as:

… a chiefly 20th century philosophical movement embracing diverse doctrines but centering on analysis of individual existence in an unfathomable universe and the plight of the individual who must assume ultimate responsibility for acts of free will without any certain knowledge of what is right or wrong or good or bad.[1]

A couple of other key figures in the early development of postmodern thought were Martin Heidegger (1889–1976) and Jean-Paul Sartre (1905–1980). Heidegger felt that in contrast to rational thought, the most important idea was a person’s existence in relation to other things. He emphasized the idea of authenticity—one’s own experience in relation to his or her place in life—and the importance of words, subjectively so, as symbols of one’s own reality. Jean-Paul Sartre, on the other hand, is best known for his denial of any meaning to life because of the final reality of death for every living thing. In his view, we are only able to make something out of our existence through the freedom of choice. In other words, our existence is defined by our choices, which we must make because they are thrust upon us. We define humanity by the choices we make.

It is easy to see how these philosophical influences began to shape the culture of Western society to move it beyond the modern period. In a sense, postmodernism came to represent a more radical form of rationalism that reduced reality to individual choice. In a simplified way, it transitioned Western thought from the idea of man as the center of reality to the idea of “the self” at the center. In his book, Fools Talk: The Art of Christian Persuasion, Os Guinness, the contemporary English writer and social critic, quaintly describes this shift. He calls it, “the age of the self and the selfie.” Because these developments also happened at a time of technical advance using the Internet, in contrast to the dictum of the modern period (“I think, therefore I am”), he expresses the one for this age as, “I post; therefore, I am!”[2]

One of the outcomes of these twentieth century philosophical developments was the reduction of reality to one’s individual existence and identity through various forms of self-expression. Two figures that had a profound influence on postmodern thought were Michael Foucault (1926–1984) and Jacques Derrida (1930–2004). Foucault believed that life is all about power, most often used quite unconsciously. Derrida combined Foucault’s idea of power with the further idea that words were merely extensions of our individual conceptions of reality. Thus, he believed that words needed to be deconstructed, meaning that words do not have the fixed meaning that a reader might assume. Deconstruction means that words need to be analyzed in terms of their underlying attempt to create distinctions that can’t help but betray biases of power in such things as race, gender, sexuality, religion, economics, politics, and others. It is apparent in deconstruction that words (and their users) cannot be trusted to convey what the reader may think because their meanings are relative to the context in which they are used. This concept helps to fuel the sense of suspicion and relational animosity that seems so evident in the world at this time. It also helps to explain something of the opposition that exists toward the Christian faith and the church.

One other significant figure in the development of postmodernism was Jean Francois Lyotard (1924–1988), a contemporary of Foucault and Derrida. He suggested that reality cannot be explained in terms of any one big story. Instead, the world needed to recognize the diversity of micro-stories that characterized various people’s traditions. He became famous for being anti-metanarrative — opposing any thought of a grand narrative, including the Christian one.

What has been presented in this brief outline is a mere summary of some of the main ideas that began to prevail in the twentieth century and that now are prominent in this one. Obviously, there is much more that could be said about the ideas and influence of various thinkers of this period, but the main point is that these kinds of ideas began to coalesce into a series of common notions that have influenced contemporary culture. The main philosophical ideas of the postmodern period concern the importance of self-expression. From this perspective, life and human history cannot be explained in terms of any specific story or narrative. In that way, postmodernism is completely anti-metanarrative or against the idea of one human story such as that set forth by Christianity (or any other religion as well). As a result, it is up to individuals, families, and various social groups to develop their own independent stories.

I suppose it could easily be a matter of debate whether philosophical ideas came first or merely began to mirror what was already reflected in the popular culture of the time. More likely than not, they developed together. Those who think philosophically are not necessarily interested in, or take responsibility for, generating popular cultural trends. If anything, they observe trends in human thinking and behaviour and simply try to describe what they perceive in philosophical terms. On the other hand, their ideas gain recognition and serve to promote trends in the culture, so there is a sense in which they develop together. Philosophical ideas simply give voice to the emergence of certain cultural practices.

At the same time, it is evident that the influence of postmodern thinking on popular culture is expansive and profound. Whether we recognize it or not, all of us (including those of us who identify ourselves as Christians) have been deeply affected by these developments, especially those of us who belong to a younger generation. Keeping this in mind, it may be helpful to enumerate some of the main features of postmodernism as it exists in popular culture at this time.