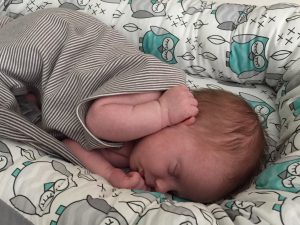 In my regular reading of the Scriptures I find myself often profoundly impacted by a story’s reality and relevance. Such was the case in my recent reading of the birth and up-bringing of Moses in Exodus 1 and 2. We all know today about Israel’s national identity and strength. Its unusual existence and survival is by no means incidental. One can’t help but conclude that it has a unique and very significant place among the nations of the world. That’s because of what we know from the Bible of its divine calling and development in which Moses played a very important role. (The photo could be him, but it’s not, of course; it’s actually one of our grandson, Isaak, just after being born last August!)

According to these chapters of the biblical narrative Moses was born and survived in very difficult circumstances. It happened before the people belonging to Abraham and his offspring had even achieved “national status.” Through one of Jacob’s sons, Joseph, the original family of some 70 souls migrated from the land of what was then Canaan to Egypt because Joseph became his family’s saviour there in a severe time of famine. That story itself (recorded in the last 13 chapters of Genesis) is an amazing chronicle of God’s deliverance for the family through one whom the brothers had originally rejected. That story speaks volumes of a more profound salvation affected by another many years later for the whole world through a similar kind of rejection. But that’s a different story.

In this story, the family has lived prosperously in Egypt for many years. Apparently, it had grown so large and strong that the new pharaoh of Egypt perceived this foreign entity to be a threat to its own existence and well-being. In one of the first recorded cases of true racial discrimination, the pharaoh of that time commits the family of Israel to slavery and orders the destruction of all male births as they occur. In a similar decree many years later (Matthew 2) another world ruler likewise calls for the destruction of all boys under 2 years of age in the land of Israel. But just as God protected the Christ-child in that time, so He arranged for the unusual protection of the baby Moses when he was born so many years earlier.

It must have been an especially troubling time for many Israeli families. But a certain Levite couple, according to Hebrews 11:23, considered that their son was no ordinary child, and by faith determined to challenge the edict of the king. Jochebed, the baby’s mother, having determined that she could no longer go on hiding him, prepared a little “ark-like” basket to place him in the Nile river assigning his sister Miriam to watch what might become of him. By God’s providence, on a day when the Egyptian princess came to bathe in the river, she discovered the basket with the crying baby inside. And when she saw the child her motherly instincts came alive and, despite the pharaoh’s edict about Hebrew boys, she immediately decided to adopt the little darling. Miriam, meanwhile, providentially making the most of the opportunity, suggested an appropriate nurse, the baby’s real mother! And so it was that the baby not only survived certain death but enjoyed his mother’s early care and also, no doubt, instruction about his divine heritage.

Moses was actually named by his adopted Egyptian mother. The name was a reference to her experience of “drawing him out” of the water of the Nile. Of course, the name was prophetic, because in a twist of irony, he was the means by which the Israelites (as they came to be called) were drawn out of slavery in Egypt and escaped the clutches of an evil realm to ultimately become the great nation we know today as Israel. Furthermore, Moses “drew victory” out of the waters of the Red Sea through the final defeat of the Egyptians there. But how that happened is actually another chapter.

The significant thing in this chapter is how God used a miracle to prepare a deliverer for His people when they were overwhelmed with pain and suffering in the land of Egypt. Exodus 2:24 tells us that God heard the people’s groans, remembered His promise to Abraham, Isaac, and Jacob, and genuinely cared. God’s deliverance for His people came by way of a man who, though he belonged to the family of Israel, grew up in Pharaoh’s house so he might know all the ways of the Egyptians and use that learning for God’s greater purposes.

This story is full of lessons and relevance for our wisdom today. On one hand, it’s a story of God’s mercy toward one couple as they determined to trust Him for HIs help while in the midst of huge political constraints. On the other hand, there is a very real application for all true believers. Christians today are also living in world that is foreign to them. At times, it appears they are held captive by God’s Enemy, Satan, in a whole variety of ways. And many times they also suffer discrimination and severe persecution. They too are now on a journey of ultimate deliverance from the world’s system through One who survived death by a true resurrection. He now leads His people through the wilderness of this world by the heavenly cloud of His Spirit, promising eternal life to all who put their trust in Him and follow Him. Someday, He will come again to bring them into their promised inheritance — both Israel and the church. In this way, God’s salvation for all God’s people is found in the miraculous life of Moses.