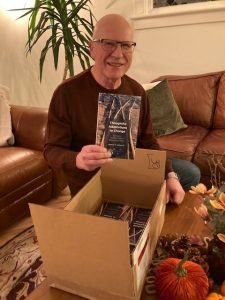 It’s been a while since I’ve posted anything–possibly because I’ve been preoccupied for the past year with a fairly demanding transition ministry in Three Hills, Alberta at the Prairie Tabernacle Congregation. It has meant a couple of on-site Sunday worship service preaching ministries each month (and the week in between) to focus on transition and pastoral matters. Additionally, almost daily, I have been occupied with the church’s ministry from our home in Calgary. Though stretching in lots of ways, it has also been very interesting because of the church’s former association with the almost hundred-year-old famed Prairie College.

The second reason I haven’t posted for almost a year is because we now are much more taken up with our extended family here in Calgary, in Edmonton, and also in Maple Ridge, BC. It’s been a delight to spend a good deal of our spare time with children and grandchildren. Two of our families now live within two blocks of our home so we are able to visit easily and often. It’s such a delight to share time together at this stage of our individual lives. Since moving here in August of 2020, we have very much enjoyed getting to know our new Calgary neighbourhood.

The third reason for this hiatus in posts has been somewhat of a preoccupation with the thing that has been on all of our minds for the past couple of years–COVID and its many challenging permutations. Besides seeking to navigate it well for our own sakes, we have tried to relate to it in the public sphere in a way that is also helpful to others. It is truly amazing to think about all the ways the course of our lives has been significantly altered by this earth-shaking event.

Like many of you, we have been fascinated by the large spectrum of response to both the pandemic itself, but especially also to its government management–both provincially and nationally. I have also been quite deeply moved by how this thing, quite ironically, has affected the Christian church in general as well as particular local churches right across the country. Never have we seen such widespread polarization, not only of the general population, but of the church itself.

On one hand we see those who are sympathetic with governments who are seeking to do the best they can to manage so many different aspects of the pandemic. On the other, there is widespread suspicion and outright rebellion toward all the ways in which the authorities have addressed the rise of the disease. Many Christians have felt that we need to do everything we can to cooperate with government initiatives, not only for conscience sake (because Scripture calls us to honour those who serve in these capacities) but also because it is a way of fulfilling Jesus’ command to love our neighbour. By adhering to the prescribed precautions, they argue, we are preventing others from getting sick while providing a good example of how we should live in relation to one another.

Those Christians opposed to extensive government management of the pandemic have felt governments are using the occasion to impose unjustified power on the citizens of the land. Others go even further and speak of government response as an organized conspiracy to increasingly control all the populations of the world. They are inclined to speak of governments’ response to the pandemic as leading toward a one-world government–a definite path towards the emergence of the antichrist of which the Bible speaks. Some have even postulated that the vaccine itself possesses computer powers that can/will be used to control the lives of all who accept it. Still others see the vaccine program as an insidious plan of certain pharmaceutical companies or even particular individuals to become the wealth barons of the world.

My own theory concerning the kind of polarization we are seeing in these days (in relation to the pandemic and other matters) is that the world is increasingly confused by the emergence of the postmodern mindset. Since a major element in postmodern thought is that previous structures of knowledge and authority (sometimes even including science itself) are no longer reliable or trustworthy, we have arrived at a new level of distrust and even tribalism. Witness, for example, even among the professionals, the wide variety of scientific opinions about what is true or false concerning the pandemic or the vaccine.

Though I had written this book on postmodernism before the pandemic, there is a sense in which it is even more relevant to our present situation, both in the thinking of the people of our western civilization, as well as the life of the church. Thoughtful Adaptations to Change, is an attempt to explain in fairly simple language what the shift from modernism to postmodernism is all about an how it has affected all of our lives. Of course, I also think it speaks quite powerfully to how this change has affected the church and what she can do about it.

I am pleased to say that a third printing of the book has just arrived and is ready for distribution. Though the book can be ordered online from Amazon or the publisher, Friesen Press, I would be happy to send copies to any who desire for $25 including the cost of shipping. You can order the book through this website, or by contacting me directly by phone or email. I can also send you multiple copies at a reduced price so that you can use the questions at the end of each chapter as a means of discussion.

I look forward to seeing how the book might stimulate some constructive thought about what it means to live well in these confusing times.