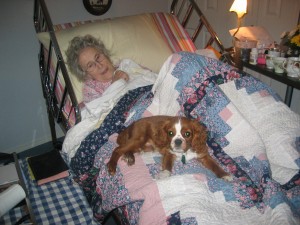 My wife’s mother, Laura Anderson, has lived with us here in Prince George for more than 13 years.  Last week Monday, December 1, after a couple of weeks of increasing pain and medication she quietly slipped into God’s presence.  (In Feburary she would have been 98.)  After being confined to bed for the last three years and expecting her to go anytime, it was quite shocking when she was actually gone.  For months we had prayed for her regarding her departure and wondered when and how it would take place.  And then suddenly it happened!  And now we are feeling the loss even though we often felt a bit stretched by the challenge of caring for her (with the daily aid of other care workers).

Even though she was confined to bed for these past three years with all the discomfort and indignity that such an existence entails Laura was fairly consistent about her enthusiasm for life.  She would often say that she didn’t want to depart; there was too much for which to live.  There were her family members whom she loved so much.  She liked our dog, Charlie, as well as food, and pictures, and music.  And there were those visits she so enjoyed with care workers and others who came to see her.  And also, she didn’t want to go until she had completed her assignment of telling as many as possible about the Gospel.  That was what she longed to do more than anything else.

Mother had many interests including knitting, reading, writing, playing the piano, singing, extended family, health, and Canadian politics.  She loved to play with words as in Scrabble and writing, as well as with numbers, as in keeping her bank book straight — at least until the last years of her life.  She even did a good job at juggling and playing crokinole.  She could be a lot of fun.  But she was also very serious in a gracious sort of way — especially about spiritual matters, the Bible, theology, and the Gospel.

Perhaps it was the depth of her spiritual relationship with God that made her conscious at various times during these final years of the presence of angels and even other people that had already gone on to be with the Lord.   Not long before she died she spoke quite a number of times about the beautiful singing she heard from a group of young men whom she was sure were in the house.   At one time earlier on she felt God was calling her home, but she resisted because she didn’t want to go yet.   Later she confessed that she felt she had been disobedient and asked God for His forgiveness.  After that sometimes she mused that she should have gone when God was calling to her in that earlier time.

Laura was extremely conservative and quiet in so many ways, but she could also be bold to speak her mind if she felt something wasn’t right.  And that made life a little difficult at times for those who were close to her.  But it was only because she cared so much for those she loved.  For all who knew her, Laura left a wonderful legacy of love and faith.  She was a stalwart soul, resolute in her determination to trust God in all things to the very end.

On a snowy day in December, we laid her body to rest in the local cemetery with the assurance that she was in heaven and that she will one day rise again when Jesus returns just as He promised.  May God bless her memory to her family and to all who had the privilege of knowing her.