The Value of Expertise 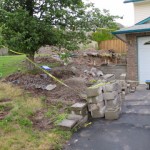 Thanks to those of you who check in to this web-site from time to time.  Sorry it hasn’t been very active recently.  It’s been that kind of season in my life — busy on many fronts, little time to stop, reflect, and to do some journaling here.  But finally today, and this weekend, I get a bit of a break.  But I wouldn’t have this break, was it not for the fact that I took a bold step this morning to do something a bit unusual, at least for me.

You see, it’s like this:  For a couple of years now, we’ve wanted to re-build a retaining wall on the west side of our house.  So this spring, I found some help to take down the wall (a relatively small task), and then a man with a Bobcat-type loader to remove some earth to make room for the new wall — a little further from the house.  That part went fine, but finding someone who could actually rebuild the wall proved to be a little more difficult.  Everyone was already busy.  As the weeks went by I finally secured a couple of estimates (between my times away from home), but decided they were just too costly.

Finally this week, being home for a longer time, I decided to get a little more aggressive about finding a contractor.  I did get a quick response from a young man who was ready to look at the job immediately.  He arrived with an older friend in a very old, noisy truck to look at the job.  They assured me they were up for the challenge and could begin the next day for a minimal cost of $40 per hour.   The young lad thought it might take them about 5 days to complete the job.  Sounded good.

On the first day the young man showed up alone.  I decided to work with him myself to give some direction and to hurry the job along.  Strangely  however, I found myself giving quite a lot of direction to a person who was supposed to know what he was doing.  He also seemed to lack basic supplies like stakes and chord, etc.  I noticed too that I was doing most of the digging!  But I figured I was at least going to get the job done quite inexpensively.  The day ended a bit sooner than expected (from my perspective) with the contractor asking for cash for his work that day, and a ride!

The next day, the job got started late, but at least included the older partner.   That fellow seemed a bit more knowledgeable so I left them to work at it while I occupied myself with pressing ministry matters.  A few hours later I checked in with them and found little progress and a good deal of quandary about how to proceed.  We discussed options, based on my minimal understanding, and left them to follow through.  Checking later, I saw that things had proceeded slowly and the work appeared to lack expertise.  Again, the day ended a little sooner then expected with a request for a cheque, made out to the helper’s personal name, so that it could be cashed at a money-mart.

The next morning (today) I found myself awakened early with thoughts about how this job was proceeding and what it might take to finish.   After some Bible reading and prayer, I came to the conclusion that I would have to end the contract.  This is something I had never actually had to do before, so I contemplated what to say.  I decided I would call the young man and tell him I had some unwelcome news for him — that I would not be able to hire him any longer, because, “I couldn’t afford what he was able to provide.”  So that’s what I did.  I called him on his cell about the time he was to leave for the job and gave him the bad news.   I gave him my explanation and it wasn’t long before he and his partner arrived to pick up their tools.   As the young man began gathering his things, he presented me with a substantial charge for cancelling the contract.  Though it wouldn’t really have been required, I did, in the end, give him the cash I had on hand, which was about half of what he demanded.  He seemed satisfied.

I then contacted the person who had give me the previous higher estimate.  Though I knew I would be paying more, I came to the conclusion that the expertise and professionalism would be worth it.  Now I have the peace of knowing the job will be done properly, attractively, and completely.  And I won’t have to be on hand to “baby-sit” the project, micromanaging details about which I really knew little.

A couple of Proverbs, where I am reading these days (NIV translation), seem especially relevant to this experience: 26:10 — An employer who hires a fool or a bystander is like an archer who shoots recklessly, and, 27:12 — A prudent person foresees the danger ahead and takes precautions.  The simpleton goes blindly on and suffers the consequences.   There is a great deal of wisdom in these Proverbs about hiring, planning, and reconsidering a certain course of action.  As my wife would say, you get what you pay for.  Hiring expertise may be a little more costly, but it is well worth it, considering the consequences.  And it’s better, sometimes — if at all possible — to end a relationship sooner than later (and so to cut one’s losses) if it means continuing is going to make things worse.

I’m sure there are lessons in this experience with many different kinds of applications for life and effective service.  We need to be caring and gracious in our dealings with people of every kind, but we cannot allow bad company to sabotage  a worthy mission.  May God help us to understand and act upon the difference.